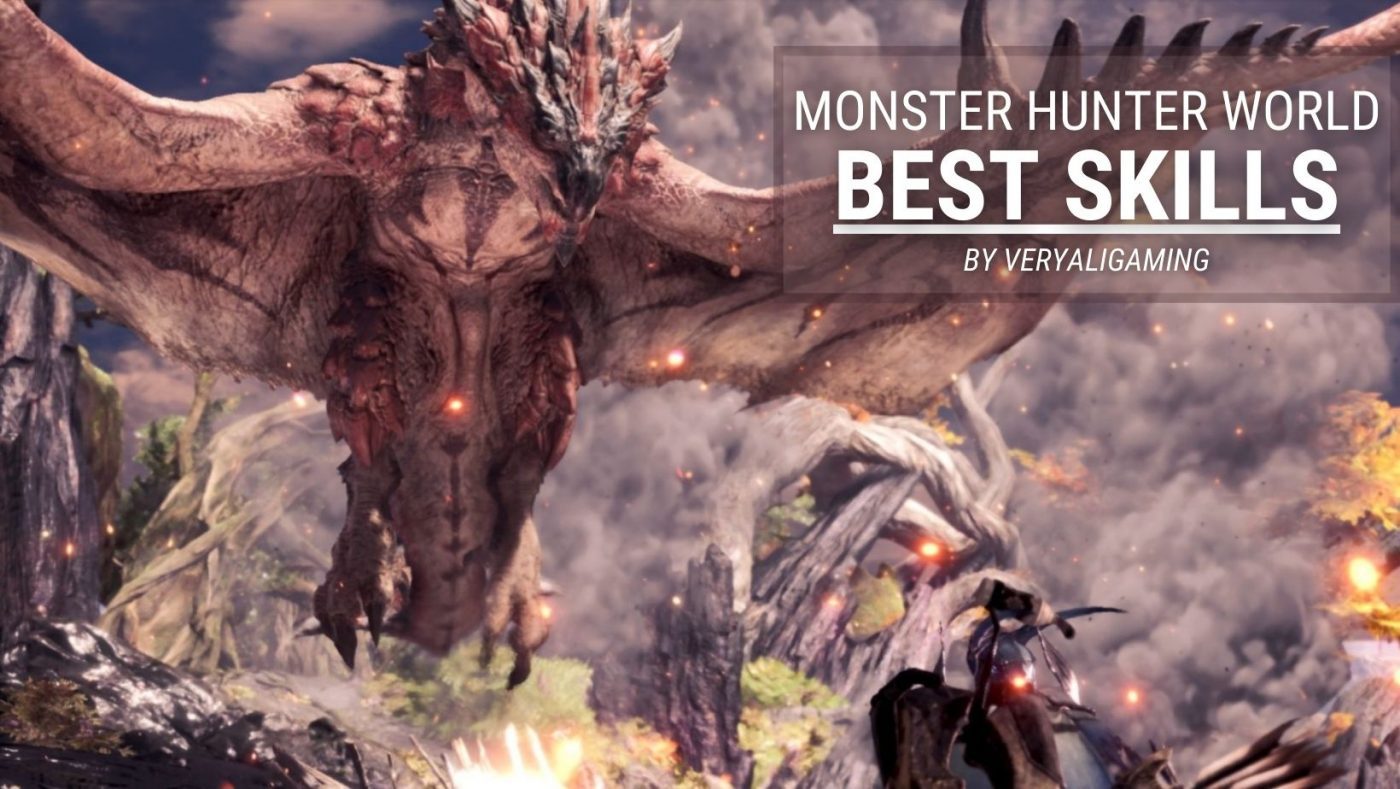 There are tons of skills in Monster Hunter World. Check out which ones are the best in this MHW Best Skills guide.

Monster Hunter World allows you to use various weapons, shields, and skills. These skills come in handy, especially when dealing with a difficult foe. Having the right set of skills can change the tide of battle in your favor instantly. Today, we are going to be taking a look at the MHW Best Skills.

Since there are all types of skills in Monster Hunter World, this guide will feature the 3 best offensive and 3 best defensive skills in the game. You can even combine them to create an unexpected combo. Much like the Best Solo Weapons, you will want to have the best skills equipped to fight monsters effectively.

That being said, let’s get started on the MHW Best Skills.

As previously mentioned, we will be talking about the damaging skills and the defensive skills. This list includes something for players of all kinds so you’re certain to find something that you’ll like. Now, while we are on the subject of damaging skills, I will further categorize them into two parts; Damage skills and Utility skills.

These skills will increase your damage output. They are important for causing flinches and part breaks on the monster. Using these skills will allow you to easily defeat a monster – which is the whole goal of the game.

If you’re a veteran of the Monster Hunter series, you already know how important crit boost is. The game allows your weapon to deal critical damage in it. You have to get your affinity up and that will give you a chance to deal critical damage. If you have 15% affinity, that means that you have a 15% chance to critically strike from your attacks. When that critical hit lands, you’re going to deal additional damage to the enemy.

What Critical Boost does is increase the amount of bonus damage. One thing to keep in mind is that the type of damage it deals with is going to be your basic attack – or raw damage. It does not affect elemental damage or ailments. If your weapon has a 300-base attack, that will receive benefits from the crit boost.

Another useful skill for critical strikes is the Critical Element. While it can be considered as a separate entry, I will include it here since it is pretty much the same. It is the same idea as crit boost; you build up your affinity to increase crit chance, but this time you’re gaining bonus critical elemental damage. If your build revolves around elemental damage, this is the skill to consider.

You can even swap between the two to deal consistent damage – whether raw or elemental. Depending on your playstyle, focus on one and further enhance the effects by equipping relevant armor or weapons.

This type of damage completely ignores the hit zone values. These values determine how much damage a monster will take on a particular body part from a weapon. Explosive damage ignores that alongside affinity and crit boost. This damage deals a set amount of damage regardless of any other factor.

The Artillery skills enhance the explosive damage. If you combine it with the Zorah Magdaros armor set, you can increase the maximum level of Artillery all the way up to 5. This skill is extremely valuable for all explosive damage types, particularly gun lance shelling, sticky ammo, wyvern ammo, and charge blade impact.

You have some skills and a few attacks that deal this type of damage. Using the Artillery skills will boost those attacks, ensuring that you swiftly defeat the monster. Often, you’ll find that the Artillery skill is paired with the Focus skill. Combining both of these skills will allow your special ammo to come back sooner – like the wyvern ammo. You can also add the Special Ammo Boost which further increases the damage of special ammo. Having a mix and match of these skills will allow you to deal insane amounts of damage while firing from afar.

Moving on to probably the best damaging skill, Fortify. This skill increases your attack by 10% and defense by 15% each time you faint. You can fall twice in battle, meaning that these effects will stack together. If you haven’t yet, I highly suggest that you go and test it yourself. This skill works best if you are playing alone. Since you get three lives when playing solo, you can faint twice on purpose and use that last life to deal tons of damage.

One thing players of the game often overlook is that your defense also increases a lot thanks to this skill. This makes you not only deal tons of damage but also become a walking tank. Fortify trivializes playing solo. Getting knocked down will only give you additional rewards instead of worrying about losing the fight.

The best part is that this skill also works well in multiplayer. While you shouldn’t intentionally get fainted online, getting knocked down once is fine. That way, you’ll come back stronger and be more useful to your team. Despite being on the contingent that you have to faint a few times to reap its rewards, I consider this to be a top-tier skill.

Now that we have covered the top 3 attack skills, let’s shift our focus towards the defensive skills. My playstyle focuses more on dealing damage but I also acknowledge that having a good defense will allow you to last longer in a fight.

While you won’t deal tons of damage, you will become a bullet sponge for your team so they can roam around freely.
There are surprisingly a lot of defensive skills in Monster Hunter World, but we will be taking a look at the best 3. I used these skills in various matchups and found them to outperform most of their alternatives.

I was tempted to put Fortify on the defensive list as well since it offers amazing defensive stats. However, I want to showcase other skills to allow players to choose from a variety of options.

Most players overlook Tool Specialist and choose other skills over it. Despite being nerfed a while back, it still performs really well. Tool Specialist resets your cooldowns faster, allowing you to use mantles efficiently. This is one of those skills where most players haven’t realized how effective it is but if you try it out, you will certainly love it.

One way to look at it is if your damaging mantles recharge quicker, you will deal consistent damage despite equipping a defensive skill. Due to its effect, this can be considered as somewhat of a utility skill.

This skill gives you damage reduction. The best part is that it scales as you progress further into the game, making it relevant at all times. For instance, if you take 100 damage and you have 50% damage reduction, you will only take 50 damage. Since it scales with percentage, you will negate higher amounts of damage the more hits you take. In short, the stronger the monsters get, the stronger Divine Blessing becomes.

One of the reasons why this skill is considered really good is because you only need two pieces of an armor set to activate it. Those pieces or armor sets are really efficient anyways. If you are stuck on a difficult boss fight, I recommend trying out the Divine Blessing so you don’t die in a few hits.

Without any doubt, the strongest defensive skill is the Health Boost. It not only increases your current health but also increases your maximum health capacity. Having a chunky health bar will allow you to withstand damages from even the toughest bosses. This allows you to stay in battle for a longer period of time while sustaining damage.

The aforementioned Divine Blessing reduces damage but you still have a chance to get one shot by an enemy. However, if you have a large chunk of HP, no matter what boss or monster you face, you will survive them for a few hits. Plus, Divine Blessing doesn’t always activate since it has a predetermined chance to block damage. Health Boost, on the other hand, will always be activated.

This is a fairly cheap skill, taking up three small decoration slots. The tricky part comes when you have to choose if you want to have more HP or more attacks. Depending on your build, going for the relevant skill will assist you greatly. If you are focusing on a defensive build, the Health Boost will always be the best option.

That brings us to the end of our list about MHW Best Skills. No matter what play style you have, these skills will come in handy when facing monsters. Pick any of these skills and combine them to get additional bonuses, whether you are an offensive player or a defensive one. On top of that, having the right armor set and weapons will further enhance your usefulness. Also, check out our guide about the Best Sword and Shield Build to find ideal weapons for yourself.

I hope this guide assisted you in choosing the ideal skill for your playstyle. Kindly leave a comment letting me know which skill is your favourite and which ones you are currently using.