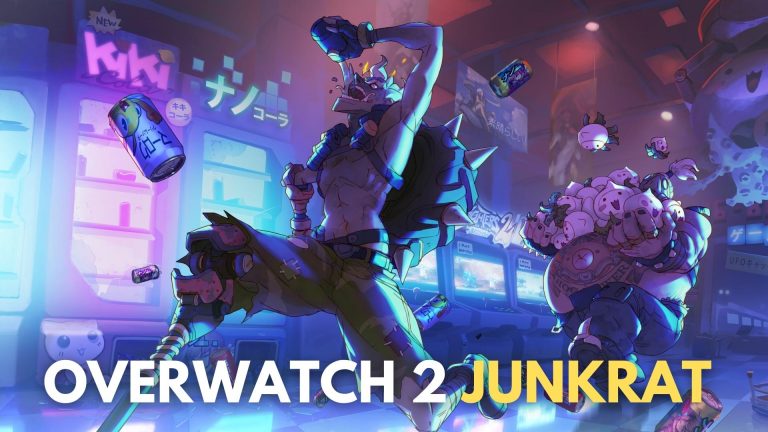 A complete guide which will be covering Junkrat and all his abilities so that you can have an easy time getting started with this hero.

Overwatch 2 is full of iconic characters, and Junkrat is no exception. With his buddy Roadhog, they are always set to cause mayhem wherever they go.

Today’s guide will cover Junkrat in detail so you know everything about it before picking him up as your main and how you can make a significant impact in the game, especially when the enemy team has shields on their side.

So let’s get right into it.

Overwatch 2 came with quite some changes compared to the previous title, some of which are switching to 5v5 combat from 6v6, making the game more competitive by limiting the choices for the players.

Now you have to assemble your team wisely with the right composition, or you might going to have a hard time facing your enemies.

The game offers multiple game modes to play; if you are a casual player, you can try the unranked playlist where things are not that aggressive and enjoy the game, but if you are a competitive player, then you can indeed look into the ranked playlist to test your skills and rank among the best.

Growing up in the wastelands of Junker town really did its thing on Junkrat; he got raised as a scavenger, and with his buddy Roadhog on his side, they landed on an extremely valuable treasure left off by the Omnics.

This same treasure got him kicked out of Overwatch, but he was successful enough to hide it at a good spot. Junkrat is all about mayhem, and with his explosives and trap, you can have a pretty action-packed experience.

Junkrat is among high-profile DPS characters that have a learning curve; the loadout offers a unique playstyle and takes its time to get used to. Instead of point-and-shoot, you have to direct your shots properly in order for them to leave an impact on your enemy.

The character is massively used in competitive games to rush or break the defences of the enemy, as his frag launcher can depletes shields or any barriers placed by the enemy teams within seconds and allow your teammates to push while the enemy regains their cover.

Junkrat packs an impressive loadout which destroys anything that comes in its way. Starting off with his weapon to his ultimate, we will be covering each and everything in detail below. The weapons take time to get used to, but once you master them, there’s no going back.

Junkrat’s primary weapon launches frag grenades in the air that explodes over time and does massive damage to the enemies; the weapon is extremely helpful when you want to shake the enemy’s defence.

The concussion mines are very useful when you want to trap your enemies or throw them away on the map, and you can also use these mines to travel significant distances, as Junkrat’s abilities don’t do damage to him.

The mine is attachable to the surface, making them sneaky yet deadly to the enemies, and you never know when Junkrat will explode them and blow you away. They are destructible though if you shoot them; for that, you have to find them before it’s already too late.

The controller helps to time the explosion so you can lure your enemies and then impact them altogether. The controller stays in your hand as long as the mine is active and has not been destroyed yet.

A very sneaky yet deadly tool if placed right, steel traps are hard to find, and they restrict the movement of the enemies who steps on them, making them an easy target for you or your teammates.

One thing we need to keep in mind is that steel traps are very easy to destroy, so make sure to place them in areas where it’s hard for enemies to notice while moving, such as in corners or areas with shades.

Heroes like Pharah or Echo can easily see the traps on the ground, so keep it away from their sight and also plan it accordingly if the enemy team has a Junkrat too, as those frags can hit the trap as well, also avoid keeping it in the way of payload, or it will get destroyed as well.

If you think Junkrat has done showing off, then think again; even after dying, he doesn’t stop destroying.

Total mayhem allows Junkrat to drop explosives the moment he dies, inflicting massive damage to the nearby enemies, sometimes good enough to take them with him. It’s a really deadly trick against the moments when you can’t get out of a sticky situation, yet you want to help your team.

Rip-tire is a fan favourite when it comes to destruction, and it’s tire full of explosives that can roam around the map and explodes in between your enemies to even cause a squad wipe if they are not prepared for it.

While the Rip-tire is so deadly and chaotic, it’s still destructible if an enemy shoots at it, so use it wisely, and instead of covering long distances with it, plan to surprise the enemy when they least expect it.

The ultimate is really useful in capture-the-point game modes where crowd control and map acquisition are essential.

There you have it, guys, a detailed guide about Junkrat and how you can get the most out of this unique hero in Overwatch 2. We have covered all his abilities and also to which type of playstyles this hero suits best.

We hope that this guide will benefit you. If you really love what we do and want to support us, then kindly do share these guides with your friends and family as it helps us grow. Keep following for all the latest and greatest news related to gaming and more exciting guides.

We will be seeing you very soon in the next one; till then, Happy Gaming!