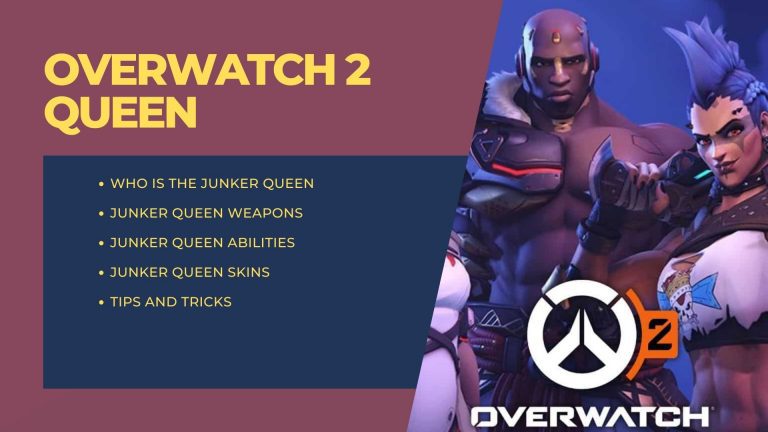 In this Overwatch 2 Queen guide, we will cover all you need to know about her, from who she is, her weapons and abilities, and unlocking her.

After being unveiled in 2019, Overwatch 2 was finally released this month on the 4th of October,2022. It is a sequel to Overwatch, which became a massive hit when it was released back in 2016. Overwatch 2 is developed by Blizzard Entertainment and is categorized as a first-person shooter game. To whom it may concern, it can be enjoyed on several platforms, including PlayStation, Xbox, Microsoft Windows, and the Nintendo Switch. This guide is for you if you are looking to find out more about the game, especially Overwatch 2 queen.

If we are being honest, the first Overwatch was just too good, and it set the bar too high. It would almost be impossible for Blizzard Entertainment to make a better game. However, that in no means that Overwatch 2 is not good. It is very enjoyable and if you do not believe us, give it a go yourself because it is a free-to-play game.

Overwatch 2 comes along with several changes from the first game. For starters, changes have been made to the characters that were also available in the original game. In addition to that, new characters have also been introduced, which takes the roster of characters to 35.

One of the major changes between Overwatch and Overwatch 2 is the team composition. Before, you could have 6 heroes on your team. However, Blizzard has decided to change that, and now you can only have 5 heroes on your team, which means one less tank per team than before.

Furthermore, many new things have been introduced as well, like new maps, the push mode, and much more.

In this Overwatch 2 queen guide, we will cover all that you need to know about her, from how to unlock her to her abilities.

What This Article Contains

Who Is The Junker Queen In Overwatch 2

We have known about the Junker Queen’s existence in Junkertown for quite some time now. However, now we finally have her as a playable character in Overwatch 2. As we have mentioned before, Overwatch 2 comes with new characters, which takes the roster of characters to 35.

The Junker Queen in Overwatch 2 is one of the three new characters in the game. The other two characters include Sojourn and Kiriko. She is the leader of the Junkers and is also called “The Queen of the Junkertown.”

Junker Queen is a tank hero in Overwatch 2. For those who are new to the game and are still learning the ropes, one of the roles that the players can pick is a tank. A tank hero basically makes things easier because they can take on huge amounts of damage and also defend the team.

If we are being honest, Junker Queen in Overwatch 2 is probably the most fun tank, right, and unlocking her is not a hard thing to do at all. We will talk about that in a while. However, before we do that, you should know about Junker Queen’s abilities and weapons.

Related: If you want to improve your gaming experience, then read our detailed guide on Overwatch 2 Best Settings For High FPS. In it, we have guided you towards the best performance and quality balance.

In this section of our Overwatch 2 Queen weapons guide, we will be talking about the different weapons available at her disposal.

The first weapon that we will be talking about in our Overwatch 2 Queen guide is the Scattergun. It is a shotgun and the Junker Queen’s primary weapon. What makes it better than many other shotguns in the game is how effective it is.

For instance, if you are able to get headshots, then you can kill your enemy with half the number of shots. Something that you should know is that the most effective range for the scattergun is the medium range. Now that the basics are out of the way, we have listed down below all that you need to know about the scattergun:

All of this combined makes the scattergun a very suitable choice to deal with the enemy before you enter close combat or as something that you can utilize to inflict the final blow to seal your enemy’s fate.

The Junker Queen’s secondary weapon is a blade called Gracie. The name might not seem scary, but as we know that you should never judge a book by its cover. The Jagged blade is an extremely useful and dangerous weapon.

The Overwatch 2 Queen basically throws the blade, and when it hits the enemy, it obviously inflicts damage on them and applies wounds if the returning blade hits the target, as well. In addition to that, it can also be used to pull enemies towards you.

We have listed down below all that you need to know about the Jagged Blade:

By the way, the cooldown of 6 seconds is from the time it is thrown. This means that by the time it reaches back into your hands, you will only have to wait for about 2 to 3 before you can use it again. Furthermore, the blade can travel a maximum of 60 meters and has a maximum air time of a total of 1.5 seconds before it returns to its owner, the Junker Queen in Overwatch 2.

Moreover, a great advantage of the jagged blade is that it can travel through walls. This means that if there is an enemy in front of you and you recall it. It will hit the enemy and apply wounds to them.

Abilities Of Junker Queen In Overwatch 2

Unlike most tanks in Overwatch 2, Junker Queen prefers dealing with their enemies in close combat as her abilities are more suitable for that because most of them have short ranges. In addition to that, the Overwatch 2 Queen has an aggressive play style, and because of her passive, she heals from all damage over time dealt by wounds.

This becomes extremely rewarding when you take into consideration that each of Junker Queen’s abilities inflicts wounds. That being said, let us dive into what are the abilities of the Junker Queen in Overwatch 2.

As we know that the team composition has been changed to 5v5 in Overwatch 2. Due to this, now you will only have one tank hero on your team. Therefore, it is of utmost importance to choose your tank hero wisely. We highly suggest that you choose a hero that has a lot of survivability. We do not know about you, but our pick would be the Overwatch 2 Queen because of her passive ability: adrenaline rush.

The adrenaline rush allows her to heal from damage over time by inflicting wounds on the enemy. This is a great ability, especially if you take into consideration how aggressive she is and her other abilities. More on that in a while.

Before we move any further, we recommend that you read our extremely detailed guide on Overwatch 2 Best DPS heroes. In it, we have covered the best DPS heroes of the game that you can use to deal maximum damage to your foes and come out on top as the victor.

The next ability that we will be talking about in our Overwatch 2 Queen guide is the commanding shout. It basically allows the Junker Queen let out a shout that not gives her some buffs but also to her nearby allies. We have listed down below all that you need to know about it:

By the way, this is the first time that we have seen a speed buff given to a tank.

Before we get into the details of what the carnage ability is, you should know a little fun fact. It was revealed by the developers that the Junker Queen’s carnage ability and Jagged Blade came from their initial idea to have Reinhardt throw his hammer.

That being said, the carnage ability basically allows Overwatch 2 Queen to whip out her axe and absolutely go ham on all her enemies. With this ability, you are able to deal a heavy amount of wound damage to your enemies once your axe strikes them.

As a result, it also allows you to heal a lot because of your passive. We have listed down below all that you need to know about it:

The last ability on our Overwatch 2 Queen guide is the rampage. This is the Junker Queen’s ultimate ability, and if we are being honest, it is the true embodiment of the saying that we hear quite often, which is “high risk, high reward.”

In it, she basically charges forward and deals damage to all the enemies that she hits in her path. To be more precise, we must say if she hits them. It is because a downside to this ability is that once you activate it, you cannot control the direction of your charge. Therefore, it is quite possible that you miss the enemies in your way.

However, if you hit them, you will inflict quite a lot of damage to them and more. We have listed down below all that you need to know about it:

There are currently eight Junker Queen skins in the game that you can unlock. These skins can be unlocked by buying them using legacy coins. In addition to that, some of them can also be acquired by buying the Premium Battle Pass.

The eights skins that are currently available in the game are listed down below:

How To Unlock Junker Queen In Overwatch 2

Getting the Queen in Overwatch 2 is no hard task. If you are someone who has played Overwatch, then it will be even easier for you. It is because all that you need to do to get the Junker Queen is log in to your Overwatch 2 account, and viola, she will be added to your roster automatically.

However, if you are not a returning player, then the process is a little different but still not one that can turn out to be troublesome for you. Simply put, you will just have to go through the tutorial and play a few matches online. The Junker Queen will then be added to your roster.

Before we move any further, we highly suggest that you read our guide, Overwatch 2 Best Healers. In it, we have covered the healers in the game in detail so that you can support your team during combat in the best possible way.

Before we conclude our Overwatch 2 Queen guide, we have some tips in store for you that you should keep in your mind so that you can have a game plan when it comes to when to use the different weapons of the Junker queen.

A general strategy that we will suggest is using your knife and shotgun if there is only one enemy hero. If there is more than one, then you can go in the order of using the axe first, then your knife, and then the shotgun.

In addition to that, carnage is a great ability, but you should make sure that you do not go into a 1v5 situation because you will not be able to survive that. With that, we conclude our Overwatch 2 Queen guide. We hope that you enjoyed reading it. If you found this guide to be helpful and informative, consider reading our other guides on Overwatch 2, like best settings, best DPS heroes, Kiriko, and more.