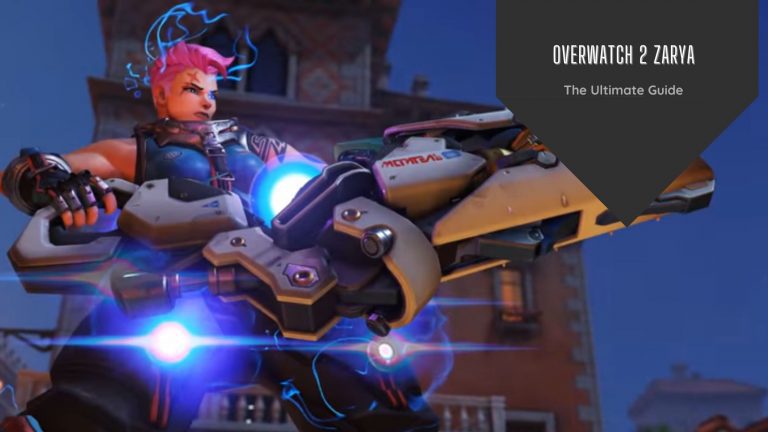 Overwatch 2 Zarya is making a prominent performance among tank heroes in the game. Here is the complete guide to use Zarya as tank for your competitive matches.

The famous hero shooter returns with an evolved sequel, Overwatch 2, on October 4th, 2022. Despite a shaky launch, the game is gaining much attention from fans and new players globally, now thanks to the Overwatch 2 best settings. With this massive attention all over the internet, players often seek guides for picking the exemplary character to pursue ideal gameplay, including Overwatch 2 Zarya.

Veteran players might already be familiar with Zarya as she returns from the original Overwatch. Meanwhile, now beginner players also seem to be interested in utilizing the Zarya to dive into the immersive hero shooter experience of Overwatch 2.

For those who do not know, Zarya is a tank hero with massively overpowered abilities. Tank is the hero category that involves the characters in front of the match. It means they will absorb most of the attack damage and also deal massive damage to the opponents.

The same goes for Zarya; with her roots back in the original Overwatch, she never stands back to protect her allies and has tons of resources to mitigate the incoming damage. If this sounds about right for your first playthrough of Overwatch 2, then you must learn Zarya’s abilities and combat details to master the game.

With that said, let’s discuss all the details of Zarya in Overwatch 2.

Who Is Zarya In Overwatch 2

As for Zarya, she is an athlete from Krasnoyarsk, Russia, with ambitions to give everything to the people. She left her athletic goals behind only to protect her people. Meanwhile, Zarya now utilizes these athletic abilities to stand firm on the frontlines of battle and shield the allies in her team.

Moving on, Zarya masters all the game modes of Overwatch 2. Thanks to the character’s unique all-rounder abilities, Zarya dominates every match of Overwatch 2. But still, there are some limitations where Zarya might not be a perfect character in the game.

For that instance, we will discuss all the details you need to know before picking Zarya for game modes in Overwatch 2.

The first and most important aspects that players need to know are the stats of the Zarya hero. Along with her role of being the prime Tank, Zarya now has a total HP of a whopping 475. This includes 250 Base Health and 225 Base Armor of Zarya.

With this HP on your side, players can easily measure the tankiness and strength of the character and why she is recommended in the front lines of the battle. As for the damage, Zarya is known to tear the opponent apart at close-range combat. Unlike other characters, where offensive heroes must keep their distance, Zarya will take the risk to go up close and personal and clear the path for the team.

As for the weapon, she uses Particle Cannon, which makes up for the excellent tank character in Overwatch 2. Looking at the stats, Particle Cannon is hugely overpowered, with 75 damage per second. This weapon is perfect for Zarya because she qualifies for close-range combat, and Particle Cannon has a short-range beam. With this short distance, players will be able to maximize the damage output of the character.

Now the 75 damage per second was only for primary fire. Particle Cannon also involves a secondary fire that dishes 47 damage. However, that is the energy grenade launcher, which means the accuracy and suitable usage of the secondary fire are crucial to making the most out of the weapon.

Players can expect a mid-level offense tank from Zarya in Overwatch 2. Unlike most tank heroes in Overwatch, Zarya tends to focus on the offense side. The best aspect of the Zarya hero is her protection abilities during the match.

As you dive further into the gameplay, you will realize the situation in competitive matches escalates quickly. For that instance, players need to make efficient decisions at the right moment to save the team’s progress as a whole. This is where Zarya contributes a great portion of offense to deal massive damage in the close-range combat, without absorbing much damage.

This comes in handy with her shield, known as Particle Barrier. She can utilize this bubble shield for herself and also give it to her teammates while obliterating the opponents at close range. This ability to tank the damage, deal massive damage, and save the team’s lives makes Zarya the perfect Tank hero in Overwatch 2.

Although, there were massive changes in Overwatch 2, which most people did not like at the start. But Zarya, on the other side, received more benefits from this change in the new game. It involves a 30% reduction in knockback effects on Zarya at the cost of only five players per team.

Even some players underestimate Zarya as the most complex tank hero to play. But in reality, the massive damage output and tremendous tanky abilities of the character make it perfect for both veteran and entry-level players. The developers have now allowed players to easily control Zarya in the front lines with better HP and shield.

Zarya’s abilities make her stand out among other tank heroes in Overwatch 2. As said earlier, her abilities are designed to work in close-range combat. For that instance, players can make use of various defensive and offensive abilities of the Zarya.

The first on the list is the Particle Barrier, which is also the most important ability of the hero overall. As the name implies, the Particle Barrier creates a bubble shield for damage around you for two seconds. This shield has a damage absorption value of 200 that can help you to dodge all incoming strikes.

It is easy to fall into enemies’ traps, and the situation may escalate quickly. This is where Particle Barrier is recommended to absorb 100% damage and get your character back on track. Lastly comes the catch, where all the damage absorbed by the Particle Barrier is converted into the Zarya primary weapon Particle Cannon.

Using the Particle Barrier definitely is a great resource that not only helps players alone but also assists in carrying the whole team. It also comes with a 10-second cooldown to balance the gameplay, which is not something to worry about.

After the Particle Barrier, the Projected Barrier is another excellent ability for Zarya in Overwatch 2. For the first time, players will now be able to use both shield bubbles with Zarya to push the tank characteristics to the next level.

Using the Projected Barrier will create a bubble shield barrier around your allies to absorb damage up to 200 incomings from the opponent team. Now, you can convert this damage into energy for Zarya Particle Cannon.

One thing should be noted this Projected Barrier will work for two seconds only for your allies. After that, players will have to wait for a cooldown of 10 seconds to deploy the shield ability on the team again.

Lastly, Zarya in Overwatch 2 brings the ultimate ability of Graviton Surge. Like most ults for heroes in Overwatch 2, Zarya also uses it as limited time ability. In essence, Graviton Surge is a gravity bomb that will affect all enemies with continuous damage.

On executing the ult, your opponents will be trapped inside the gravity for over 3.5 seconds and absorb overtime damage of 5 per second. Although, it may not seem enough during the heat of battle. But when executed correctly, Zarya will allow players to get out of the intense situation and devise a strategy to finish the enemies for good.

The new Overwatch 2 is not short of exclusive details and combos that can enhance your gaming experience further. However, this approach involves many practice and gameplay strategies to nail the perfect match.

Even though Zarya can be utilized to escorting the team to meet the objectives, but with some communication with team and the right character combination, you can easily push the performance of Zarya in Overwatch 2.

For instance, if Zarya and Reaper in your team collaborate in the match, executing the side-to-side ult can prove deadly for the match. It is because Zarya ult involves trapping the enemies with gravity, while Reaper will deal massive damage to all enemies, thus giving your team a significant edge to win the battle.

The best practice to master Zarya is to work in high energy, using Particle Barrier and Projected Barrier’s abilities. This way, players can dish out massive damage and utilize the best tank abilities. Lastly, communication is the key to using combos with your team to sweep and clean the map early in the match.

Zarya alone can be easily counted among the Overwatch 2 best DPS heroes. But her best abilities involve staying in the front line to clear the path for her team members. So make sure to understand Zarya’s skills and characteristics well before diving into the competitive modes of Overwatch 2.

That is about it for our guide on Zarya in Overwatch 2. Do you find this guide helpful for using one of the best Overwatch 2 tank characters? We would love to hear your thoughts in the comments section below.

Now that you are here, why not read: Overwatch 2 Best Healers