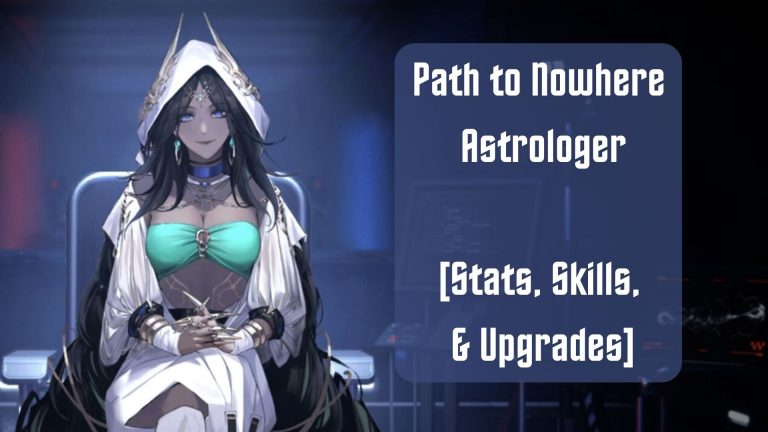 This is our definitive guide to Path to Nowhere's Astrologer.
Shoaib Rashid·November 1, 2022·7 min read

All about Astrologer's stats, skills, and upgrades.

Path to Nowhere has a hefty pool of Sinners to choose from, and Astrologer is one of the most powerful. Path To Nowhere’s Astrologer is an Arcane mage, meaning she deals explosive damage in a large area to quickly clear the field.

Astrologer is by far one of the best S-tier Sinners for her ability to cover several squares at once. Her ultimate ability allows her to scale the field without needing to move her from her original location.

The Astrologer is a highly powerful Sinner in Path to Nowhere. She is an S-tier character that’s extremely rare. The Astrologer has higher base stats than more common Sinners with unique skills and abilities.

She has an Arcane job in the game, which means that she can deal explosive damage on the field. She deals ranged Area of Effect (AoE) magic damage to 1 block in the game. Her base attack speed is 0.75, which is a lot faster than many other common Sinners.

Much like every other Sinner, the Astrologer has several skills with various effects. Here’s a rundown of all of Astrologer’s skills and attacks.

For the basic attack, the Astrologer attacks in one square through her magic weapon. Each basic attack deals 71% of her total magic damage. Her range extends 3 rows: 3 squares in front of her and 4 squares in the two rows above her.

The Astrologer has much higher magic damage than other Sinners. Hence, the 71% inheritance that her Basic Attack gets is more or less justified. She also deals AoE damage, so you hit more enemies in one go.

You can upgrade this skill using the Skill Up feature by spending DisCoins.

The Victory Star also has 130% of its own magic damage that it will deal to the 9-square grid surrounding itself at timed intervals. The Astrologer can only summon a maximum of 2 Victory Stars. More Victory Stars can only appear when the previous ones are destroyed.

By spending DisCoins and using the Skill Up option, you can upgrade this skill further.

This major buff is perfect for an Arcane AoE damage dealer like Astrologer. The stackable effect allows you to target one enemy and deal massive amounts of damage to them. You can unlock this buff by promoting the Astrologer to the 1st Phase.

These are the upgrades that you can append to this skill.

Realm is another skill upgrade to Victory Star. With this skill, whenever Victory Star gets destroyed or disappears, it deals 200% of its magic attack to every enemy in the 9-star grid.

This upgrade requires you to reach Phase 2 of Astrologer. But when you do acquire it, it totally flips the course of the game. It ensures that even when your Victory Star gets destroyed, it will go out with a literal blast.

Here’s how you can upgrade Realm using DisCoins.

Astrologer’s crimebrand is called “Land of Dreams”. This crimebrand guides all the Victory Stars currently present on the field. It deals an additional 60% magic damage to the Stars as well as Astrologer herself within the 9-square grid. The damage occurs at regular intervals after every second.

You can upgrade this crimebrand to increase the damage to 70% and 80%. This skill lasts for 8 seconds and can only be used once. If Land of Dreams is active, using any other skills or performing any other action will interrupt the crimebrand.

Astrologer also has a unique Characteristic. With this Characteristic, the damage of all summoned objects gets increased by 10%. This is a major buff considering that she is highly dependent on her Victory Stars. Hence, the 10% buff will help you clear the field faster.

You also get a Leader Skill with Astrologer. Through this skill, you can inflict damage to the Real Realm two times in the 9-square range. You can only cast this skill on one Victory Star and cannot summon any new Stars while the skill is active.

Throughout upgrading Astrologer, you can also unlock and use certain Shackles to boost her performance. Here are the 5 shackles available for Astrologer:

The next shackle that you can unlock is Still Honorable. When active, this Shackle provides a 20% damage increase to any Victory Star on the field. The only condition is that the Victory Star must have been on the field for 10 seconds or more.

After that, you can unlock Shackles Sync II. This Shackle further increases the damage output of the minions by 8%. It stacks upon the already 8% damage boost that you got through Shackle Sync I

False Speech is the 4th Shackle that you can unlock for the Astrologer. This Shackle affects the Victory Stars. It adds a special ability to your Victory Stars that, when they disappear, you receive 5 energy.

Finally, the last Shackle that you can unlock for the Astrologer is Shackles Sync III. Much like the previous Shackle Syncs, this Shackle also grants you 8% extra damage for all minions. Combined with Shackle Syn I and II, it translates to a total damage increase of 24%.

The Astrologer is an extremely strong and rare Sinner that, when mastered, will dominate the playing field. Hence, knowing all about the Path to Nowhere Astrologer skills and stats will help you a lot in using her right.

To conclude, the Astrologer is an S-tier Sinner that deals explosive AoE magic damage to multiple enemies at once. With her ultimate skill, Victory Star, you can confidently dominate multiple squares at once.

Now that you know all about the Astrologer, it’s time to put your skills to the test. Head on over to the Play Store and download the game now.