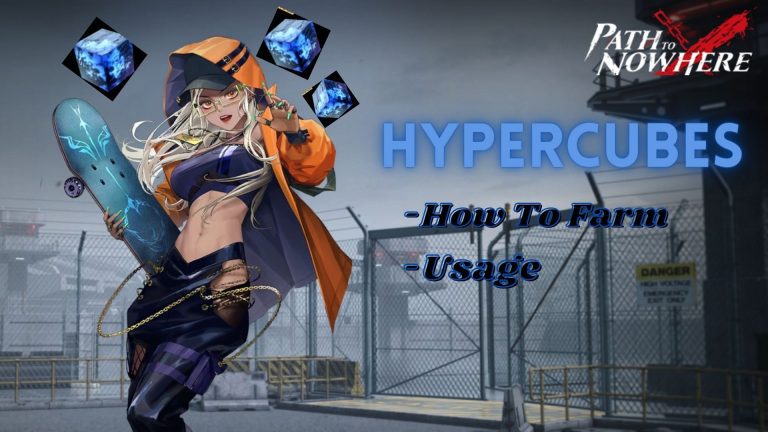 Everything related to Hypercube in Path To Nowhere is discussed in this guide.
Nauman Shah·November 8, 2022·8 min read

A rare currency "Hypercube" is an important element in Path To Nowhere and we've discussed it further in a detailed guide below.

Each game has a currency of its own which assists players in buying items, the same applies to Path to Nowhere. One of the rarest currencies is Hypercube in Path to Nowhere. Even though the game offers multiple ways to farm the rare Hypercube, the more you progress in-game, the harder it becomes to collect them.

So, to help players overcome the difficulty to farm Hypercubes, our guide contains multiple ways the rare currency can be farmed and how to put it to best use. So let’s dive right into it.

To buy in-game items, you require a rare currency known as “Hypercube”. The Hypercubes are blue-colored crystal cubes carrying value to themselves. If you are familiar with another similar tower defense game “Arknights”, think of Hypercubes as “Orundum” currency. Just like Orundum, Hypercubes help purchase in-game items including the game’s characters called “Sinners”.

Since the Hypercube currency helps buy more Sinners, it holds a lot of importance and value as the whole game revolves around Sinners. Farming for the Hypercube in Path to Nowhere gets exhausting in the late-game so we have mentioned the possible ways to collect them.

Despite being termed “rare currency”, Hypercubes can be collected in multiple ways (most of which are free to collect and easily obtained). Be aware though, once the early-game phase ends, farming Hypercubes becomes difficult.

As we said, there are multiple ways to farm for Hypercubes, especially in the early stages of the game. To farm the premium currency to its fullest in the early game and late-game too, go through the mentioned ways below:

A permanent Pre-Registration event offers rewards to each new player. The rewards can only be claimed once by each player. Among multiple rewards, there are a total of x800 Hypercubes to be claimed. To claim these rewards, go to “Events” in middle left on the main menu. Now go to “Pre-Registration Event” and click on “Claim All”.

All the rewards in Pre-Registration Event are:

Keep yourself updated with upcoming events in Path to Nowhere at Aisno Games.

By the end of the process, you will farm x800 Hypercubes. However, if you continue to check in for another 7 days straight, you get additional x1300 Hypercubes!

Don’t forget about Weekly Missions while completing the Daily Tasks. Since Weekly Missions are more time-consuming, they come under the “Weekly” category. After every week, you can farm x300 Hypercubes if all given missions are done.

Each Chapter in the game contains a number of Stages. Once a player completes all the Stages in a single Chapter with no SAN Damage to the Chief, he/she gets rewarded with multiple materials including many Hypercubes.

So grind harder and complete all Stages flawlessly, and you will farm numerous Hypercubes.

Another way to farm for Hypercubes is by completing tasks in the ongoing New Chief Assessment event. There is almost 7 days’ worth of Missions to complete and each day offers some amount of Hypercubes. The missions to perform from day 1 to day 7 to farm Hypercubes are:

Hence, a total of 440 Hypercubes can be farmed from the New Chief Assessment.

In the Suspect Pursuit Event, there are five Sinners, each with a trial to complete. Once you clear the trial with the respective Sinner, you get a “Clearance Reward” which is Hypercubes.

Summon is an S-ranked Sinner, hence completing a trial of hers gives off 30 Hypercubes.

Another S-ranked Sinner, Zoya also gives 30 Hypercubes as a clearance reward for her trial.

Since Ariel is an A-ranked Sinner, her trial completion gives 10 Hypercubes.

Ninety-Nine is a Fury Sinner and belongs to the A-ranked Sinners. Upon completing her trial, players get 10 Hypercubes.

A total of 90 Hypercubes can be farmed from the Suspect Pursuit Event.

An extremely easy Hypercube farming process is by sharing the game. To do so, perform the following steps:

Now that you are familiar with multiple ways of farming Hypercubes, let’s find out what benefits they even provide.

The main function of Hypercubes is simple, conduct the Arrest and catch Sinners. If you happen to run out of Warrants (which will happen quite frequently), the Hypercubes will be used instead.

For x1 Arrest: 180 Hypercubes are required.

In short, Hypercubes are a backup in case you run short of Arrest Warrants. Also, don’t waste your Hypercubes by choosing the wrong Arrest Banner. Always conduct an Arrest on Banner which is closest to reaching 80 counts. Once the count reaches, a guaranteed S-ranked Sinner on the next round.

You must be irritated by the lack of Stamina to play Stages, if you aren’t, wait till you move past the early phase of the game. Stamina is a resource used/consumed upon entering each match. You can run out of Stamina while clearing Stages one by one. Don’t worry, Hypercubes are the best and only solution to regain Stamina back instantly.

It is definitely not easy to collect Hypercubes in Path to Nowhere effortlessly, therefore put them to the right use and don’t waste valuable currency by spending them on the wrong Unit Banners. Make sure to keep the currency saved up for important use.

We hope our detailed guide about Hypercubes was helpful. Please share your thoughts in the comments section below and help us continue posting. Have Fun Gaming! Now that you are here, have a look at: Path to Nowhere Reroll.