Are you looking for the best guide on where to find Bronzor in Pokemon Scarlet and Violet? Well look no further, we have just the guide. 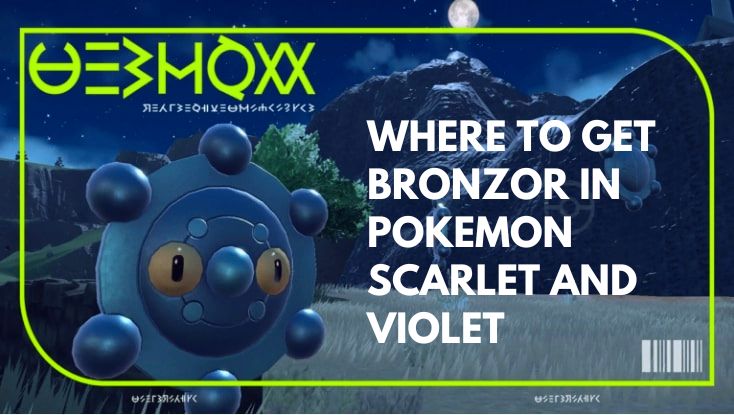 Where to Get Bronzor in Pokemon Scarlet and Violet

Bronzor is a Steel/Psychic type Pokemon that is a great defensive pokemon that can be used very flexibly with various team comps as a wall that can take some hits. It evolves at level 33 into Bronzong.

Pokemon Scarlet: Ancient people believed that the pattern on Bronzor’s back contained a mysterious power.

Pokemon Violet: They are found in ancient tombs. The patterns on their backs are said to be imbued with mysterious power.

It is most commonly found at the ruins at all times of day and there is a 60% encounter rate. The levels can vary between 9-25 so it shouldn’t be too hard for you to catch even early on in the game. It is recommended to go around the ruins as that will keep them spawning and save you some time. It can be tricky to find at times but with the help of this guide, you’ll know where to find Bronzor in Pokemon Scarlet and Violet.

A new mechanic introduced in generation 9 is Pokemons dropping materials that can be used to craft TMs. Furthermore, they vary from Pokemon to Pokemon, and the fragments obtained from Bronzor either through defeating or capturing the Pokemon can be used to evolve Charcadet into Armarouge.

Bronzor is a Steel/Psychic type Pokemon and can be easily farmed if one of your Pokemon has a fire, dark, or ghost moves since it is weak to those types.

Remember that this is only for Pokemon Scarlet where you can exchange 10 Bronzor fragments for Valorous Armor in Zapapico City.

This completes our guide on where to get Bronzor in Pokemon Scarlet and Violet due to the increased significance of grinding Pokemons and their materials in generation 9, this guide is a must-read. Especially due to the fact that Bronzor is tied to evolving Charcadet into Armarouge.In addition, adding Bronzor/Bronzong to your squad is a strong tank alternative.

If you enjoyed this guide then make sure to check out our other ones on water type pokemon and fire stones.