This Rite Of Exile Diablo Immortal guide will let you know of all there is to know about this event and how you can participate in it. 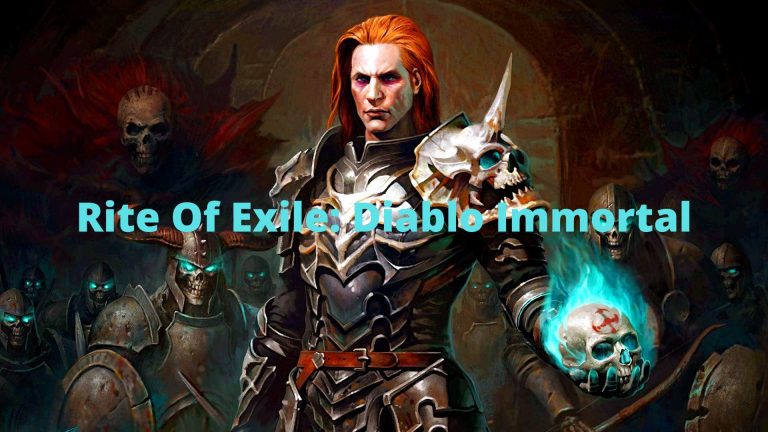 Diablo Immortal is an action-adventure game that has gotten the attention of players worldwide. The game’s intricate design and world-building have left players dazzled and wanting more. Moreover, the game allows you to participate in several server-wide events, including the Rite of Exile. So to help you in this event, we present this Rite Of Exile Diablo Immortal guide.

The game’s story lies somewhere between Diablo II and Diablo III as the game builds up on the previous mechanics. The game allows players to venture into different parts of the maps while having complete autonomy over their characters. You can choose which class to play and if you need help deciding what to go for, check out our Diablo Immortal Best Class guide.

Furthermore, the game has many events for you to enjoy and hone your skills in. One is the haunted carriage event which you can learn more about in our Diablo Immortal Haunted Carriage guide. But the event we will be discussing today arguably is the most impressive and biggest event the game offers.

This is why this Rite Of Exile Diablo Immortal guide is crucial for your success.

What Is The Rite of Exile In Diablo Immortal?

This server-wide event showcases a battle between the top of the Shadow Faction and the Immortals, the two main factions in diablo immortal. The Immortals that have the job of protecting the Sanctuary go head to head against the Shadows, who are there to ensure that the Immortals are suitable for the job.

This battle between the two factions is the Cycle of Strife, an integral part of this Rite of Exile event. This is an intense battle meaning only the best of the best are able to stand victorious. Thus you are expected to have legendary gears and gems to ensure your success.

The Cycle of Strife is the battle between the Shadow Faction and the Immortals. This high-octane battle showcases the best of both sides and displays a spectacle of a fight. The Shadows level up their gear and rank to reach the point that they can challenge the Immortals to see if they are worthy of being the guardian of the Sanctuary.

If the Shadows win, they replace the previous immortals and become the new protectors of the Sanctuary. If the Immortals win, they keep on reigning and maintain their position as the protectors leading to a non-ending cycle, the cycle of Strife.

However, as this is a battle of the most powerful players, it isn’t easy to become a part of it. Thus, ensure you follow the guidelines below to have an excellent chance to enter the Rite Of Exile Diablo Immortal.

How To Enter The Rite of Exile In Diablo Immortal?

Once part of the Shadow Faction, you will have to grind your way through the multiple events and rifts to ensure your spot in the top ten major shadow clans. Here you must ensure that you are at the top of the clan. This is because only the top eight players from each clan will be selected to face off against the immortals.

There will be ten battles from which you have to win at least six. Your triumphant victory will bring forth the final form of the immortals. One of the Immortals will turn into a goliath of a monster with unique abilities. Your final task to secure the immortal spot will be to take him down.

You will have to defeat the one monster with 30 shadow soldiers to win. The Shadow clans will replace the previous immortals and will have the option to bring forth two other Shadow clans to join them.

However, even though it might seem straightforward, it isn’t. Becoming one of the top clan’s finest players isn’t easy to pull off. Furthermore, the battles are intense and will take every fiber of your being if you want to win. Hence we have complied some methods for how you can rise to one of the top clan members to enter the Rite Of Exile Diablo Immortal.

Ways to Increase your Clan Rank

Increasing your clan rank is highly crucial if you wish to participate in the Rite of Exile. Luckily, there are multiple ways that you can do so. You can choose either of the paths below or all of them altogether. They will grant you enough experience and ammunition to become one of the finest Shadow warriors.

Next up, we have Raid the Vault, a timed event only accessible to the Shadow Faction. Your main goal in this event is to raid the immortal’s vault and steal the goods without getting spotted. When the Immortals are alerted to your ruse, the event transitions from PvE to PvP.

However, to participate in this raid, there are some prerequisites. First, you need to become Rank 3 in the Shadow faction. This will make you eligible to fulfill the following requirements. Then complete the Shadow contract so that you can get the Shard of Living Night.

You can take part in this event at two different specific server times. So ensure that you are well prepared to grind some Raid the Vault events.

The Path of Blood takes you through tedious trials and tests your skills against mighty foes. You can meet Nuon in the Court of Whispers to get into the Path of Blood Arena. As you try out different attacks and combinations, keep clearing levels and hone your skills.

You can even unlock additional levels as you naturally climb through the Shadow Ranks. Moreover, clearing these floors provides you with Marks that are essential to increase your Shadow Rank. In order to progress, you will have to clear each level, including all the floors with the extra powerful boss monsters.

You can do this as soon as you get into the Shadow Faction and start earning 200 marks for every level cleared. This will enable you to increase your ranks, unlock contracts, and raid the vault quickly.

Lastly, we have the Shadow War. The Shadow War is a PvP feature in the game that pushes you past your boundaries in order to succeed. As shown above, you can find detailed information on the event and the timings if you open your menu.

Moreover, you will be able to get legendary-level equipment if you manage to defeat teams throughout this tournament-type event. If you need information about legendary equipment, check our Diablo Immortal Legendary Gems guide. This equipment will come in handy and will increase your overall firepower. The positives from the Shadow War are too good to pass up so remember to participate.

Furthermore, It would be best if you try your hardest as there is a precious prize on the line as well. If you manage to win the whole event, you will be eligible to join the Top 10 clans against the Immortals in the Rite of Exile. This will make it so that your clan rank won’t be much of a hindrance but remember that there will be highly skilled players looking for the same thing as well.

Aftermath of Rite of Exile

All the other clans will become part of the Adventurer class once again and will have to grind their way back to the Shadow Faction. If they have five Akeba’s signet, they can revert the whole clan back to a part of the Shadow Faction. However, The game will expel anyone below level 43 from the clan and put them in the adventurer faction. Moreover, if you wish to advance to Dark Clan, you will need 30 Akeba’s signet.

The rest of the players can try their luck with Shadow Lottery or wait for an invite from the Immortals or someone from the Shadow Faction. If not, then just keep grinding, and eventually, you will be able to find your way to the top.

The Rite of Exile is arguably the game most massive event which you don;t want to miss out on. So no matter what, try your hardest to take part in it. If you win it, you will become a supreme authority in-game and will hold immense power. Thus, ensure you have this Rite Of Exile Diablo Immortal guide to help you along.

This concludes our Rite Of Exile Diablo Immortal guide. Let us know down below which faction is your favorite.