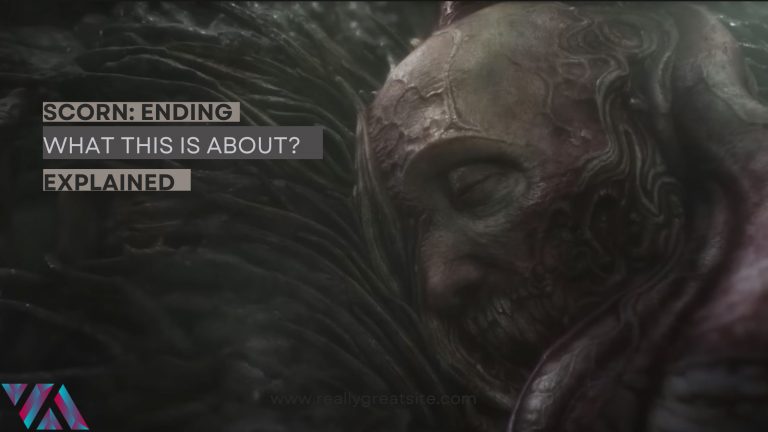 Scorn is about a dystopian post-apocalyptic world, where few protagonists try to make sense of it all, intending to escape this hostile world overtaken by parasites. Scorn has a very vague but interesting ending after completing all the achievements. This article will explain everything about the Scorn ending.

After completing the At the lowermost point achievement to unlock the Station to Station achievement the character of the game will ride a transporting device which will take them to the main hall of the citadel.

That castle is decorated with statues honoring the value of reproduction including both males and females. It displays them in a modified version despite its grand structure and meticulous design.

The structure is disintegrated as it has been abandoned for centuries showing the remnants of the thriving and powerful civilization. After entering the main hall protagonist witness an outstretched veiny complex on the ceiling.

It looks like a veiny parasitic formation with many human beings connected and tethered to the structure. It shows how it was dominated by the presence of mysterious creatures which have wings and tentacles.

The protagonist with which we were playing from the very beginning and the one who becomes a fetus both appears to be created with the same strategy to live in the mysterious world. It looks like both were in a dire desire to escape this deadly world.

The entire population of this world was dominated by the aliens and they were forced to live like this except the few ones who can survive the mysterious world. The protagonist collects the flesh and blood of the fetus by crushing it in the machine during a fight with the boss.

Portal to Other World After Scorn Ending

Later on, the Protagonist will use the blood that he collected in a glass vessel for translocating his brain cells into the hosts. Because he cannot reach the citadel and escape the world without doing it.

Devise your game strategy according to it so that you can survive long in the game. When we start the game it gives us the impact that we have entered into the dead world which is dominated and nuked by the creatures.

Citadel, other castles, and spooky hallways will depict that we have entered into the world of civilization which was destroyed a long time ago. But when you will play the game till the end. It will give you an impact that humans were working with spooky creatures to create a unique world.

A world where they can control birth, and death and forced other beings into doing what they wanted them to. In the middle of the game, the hive mind will attack and attach to the character’s body. It will hurt you and consume your health.

Keep moving forward and keep healing yourself to survive. So that Protagonist can reach the castle and escape the world from the portal.

At the end of the Station-to-Station achievement, you must have a glass vessel with you. There are a lot of images of pregnancy. Moreover, the statues which are surrounding the pathway to the other world are also pregnant.

Undeniably we can say that Scorn focuses a lot on the concept of birth and death. In addition to this, the creature which carries out the frail body of the character is also pregnant. First, you will need to activate the body using the glass vessel containing the blood of alien embryos.

They wanted to have a healthy host who can survive the cruelties of that world and be obedient to them. Later on, the protagonist tries to lift his old vulnerable body on which the doctor was operating. After that, he starts moving towards the path that will take him away from the citadel.

But, the hive-mind weakens his consciousness and you will observe the scenes will be switching. Actually, at this point, the hive mind will revert your consciousness to your old injured body.

Then, the parasite with which you fought previously will re-appear and attack you and latch onto the protagonist’s body ending his life. His consciousness will slowly leave his body. Later on, he will regret losing the new capable body reaching out to it.

Then, the fusion between the parasite and the protagonist will create a familiar lump which was surrounding the pillar at the beginning of the story. It will depict how so many survivors who managed to get out of the cocoons died.

But, only the character which you were playing throughout the game managed to get to the citadel. At last, end up getting gulped by the parasite and failed the attempt to leave the world.

The game ends on a very ambiguous note and did not explain what is going on. But by the looks of it and many hands scattered throughout the game in one perspective, an alien race crashed on earth.

They dominated humans in war and enslaved them at first using them as energy sources. Soon, they started becoming intrigued by procreation, starting to experiment with them to create a single independent entity.

At the same time, they wanted to fuse themselves with humans to become a super-powered beings after centuries. They seem to have created a side product of alien parasites fused with new entities known as humans.

They created something they could not challenge killing them all and making the civilization fall. However, the protagonist seems to have been an earlier version of modified humans. A process that was long abandoned.

Hence, why he had more human characteristics than the pregnant entities. He seems to try and find an exit from this wasteland with the last gate appearing to be some sort of a portal. But he ultimately succumbs to his injuries and becomes the target of the parasite.

The scorn ending is intense and leaves a lot of questions. There is a lot more to it than we have been able to comprehend. The most awesomesauce thing is that the ending cannot defy anyone’s comprehension of it. The developers have left it quite open for the connoisseurs to interpret it from their perspective.