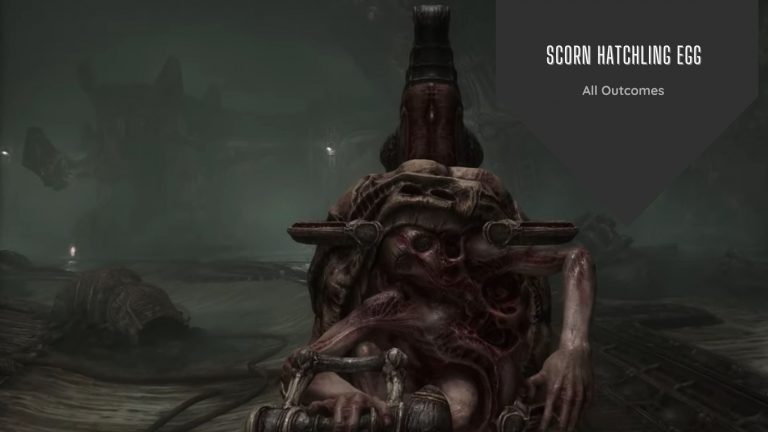 This guide details everything you need to know about Scorn hatchling egg, achievements and two outcomes.

Latest biopunk survival horror game, Scorn, is filled with blood-spilling gore and an eerie dark storyline that revolves around the world in the game. You will interact with the world through elements to progress the storyline as a humanoid creature. One of the famous interactions of your character is with the Scorn Hatchling egg that is all alone, stuck in a hard eggshell.

Players may already be aware that interaction covers a significant part of the gameplay in Scorn, and your decision paves the way for an excellent storyline. You will be completing complex puzzles while combat with the decaying aliens. Meanwhile, the hatchling egg in Scorn follows a pretty different pattern that involves taking a critical decision from the player.

For the players uninitiated with the quest, a hatchling egg is a half-hatched alien creature wiggling in the ceiling of a large arena. You will be able to encounter this creature soon after the prologue. On the other side, the game requires players to interact with the alien tech to pave the way for the hatchling egg’s fate in Scorn gameplay.

If you are also one of those players stuck with the situation with this guy waving from above, then you are at just the right place. This guide entails all the details you need to know about the Scorn hatching egg guide and all outcomes related to your decision. With that said, let’s get right into it.

What Is Hatchling Egg In Scorn

The hatchling egg is the second part of the prologue and also the terrifying one because of the shock and eerie experience at the start of the game. As the name implies, players must lift down a hatchling egg from the ceiling. That is where the real trouble begins: you will have to help the hatchling creature from the misery of eggshells.

Many players, just like us, will not comprehend the actual purpose of the next phase, which involves putting the creature in trouble and spilling some blood. This is a fair warning for people with weak hearts, as you might not want to see a whimpering alien creature that is already suffering go through intense pain. But still, it is a compulsory part of the process.

Make sure to take the creature to the next stop and use the pillar next to it. From the looks, the machine will be fixing something to the shell that makes the creature go through a miserable amount of pain and trouble.

Once you are done with that, simply look back, and you will see a spiral path taking your character to the top of the room again. Here you will see another pillar with controls to create a pathway. Now this is where outcomes will split into two. Let’s discuss both outcomes in detail and how they will impact your gameplay in the future.

Since you will be creating a pathway to move the hatchling egg to the next phase, you can pursue this path to unlock a unique achievement of the outcome. We may not reveal the actual details of the outcome just yet, so you will have to follow a series of steps before receiving the achievement.

You must set the tracks for this outcome by pushing the switch on the bottom left. To do that, you will need to interact with the pillar on top of the room, and it will be showing you the top view of the tracks. Once that is done, leave the pillar and return to your alien creature still stuck in the eggshell.

Now you can move the carrier on the path you just created to take it to the next phase. Going straight into the pathway, you will enter a new room with two pillars, one to carry and one to start the machine. Moreover, you will also be able to see a machine that looks like it holds eggs and a scooper.

From here, you can pick up the arm that will come in handy later in the gameplay. Now that the creature is no longer alive, you can move on and leave the room from the other side. Proceeding further, you will see a large gate with two more interactable pillars. However, players can not interact with these pillars right now as it requires some grip or key to interact with the pillar and hold the door.

To get that, you will need to proceed to the left side of the area if you are facing the doors. Here you will see numerous rooms, but you will have to find a room with a machine that fits a hand. Use the alien creature’s hand that you picked from the remains to fit a grip on the skin.

Now that you have this grip item on the alien’s hand, you can return to the pillars on the gate. Use one hand to hold the gate open. Meanwhile, you will have to use the other pillar to open up the gateway to get to the other side of the room.

That is about it, as you have finally opened up the gate to complete the game’s prologue. Although, the result of this outcome was the demise of the little hatchling egg creature in a most brutal way. But still, his remains of hand did aid the player in achieving the goal of completing the puzzle of opening up the gates.

Additionally, this outcome will not reward players with the unique achievement known as 001 Achievement. For that instance, you will have to pursue the second outcome of the puzzle. However, killing the guy will unlock an achievement, “Hand in Hand,” so still better than nothing.

If outcome #01 sounds too brutal, the second outcome is your choice. It is because this outcome does not involve killing the little alien creature but instead helping it. We will continue again from setting the tracks after fitting something in the hatchling eggshell.

From here, instead of setting the tracks in the bottom left, you will have to put them from the right side of your view. In essence, this is the opposite path to what you took earlier with outcome #02.

From here, take the hatching egg to the new room with a new set of pillars to launch the machine. Interact with the big one to pick up the half-hatched egg and put the creature into the machine that will fit the egg.

Now use the mall pillar to control the saw blade that will cut through the egg’s shell. This may look brutal again, but fortunately, you will save the alien creature from the forever misery of being stuck inside the egg.

You can now remove the remains of the eggshells and finally free the alien creature. The little guy will be able to come out and, after some time, even walk and follow you around the room.

Once the grip is attached, progress through the gate by connecting the hand of the alien with a grip on one pillar while controlling the other by yourself.  This will again open the gates, but now the creature is being used to hold the door open. This outcome will reward players with the achievement “001,” and you can progress the storyline from here, bidding farewell to the egg creature.

As per the outcomes, the demise of the alien creature is decided, as you can either kill him or use him to your advantage to hold the door for you. Even if you kill the creature, the remains, like the hand, will still be valuable to use and progress further into the story of Scorn.

In this case, both outcomes do not contribute much to the overall ending of the puzzle. But still, saving the alien creature definitely feels rewarding among players.

That is about it for our guide on earning the achievements of two outcomes for the Scorn hatchling egg. Do you find this guide helpful for navigating the dark, eerie world of scorn along with the alien partner? We would love to hear your thoughts in the comments section down below.

Now that you are here, why not check out: Scorn Achievements