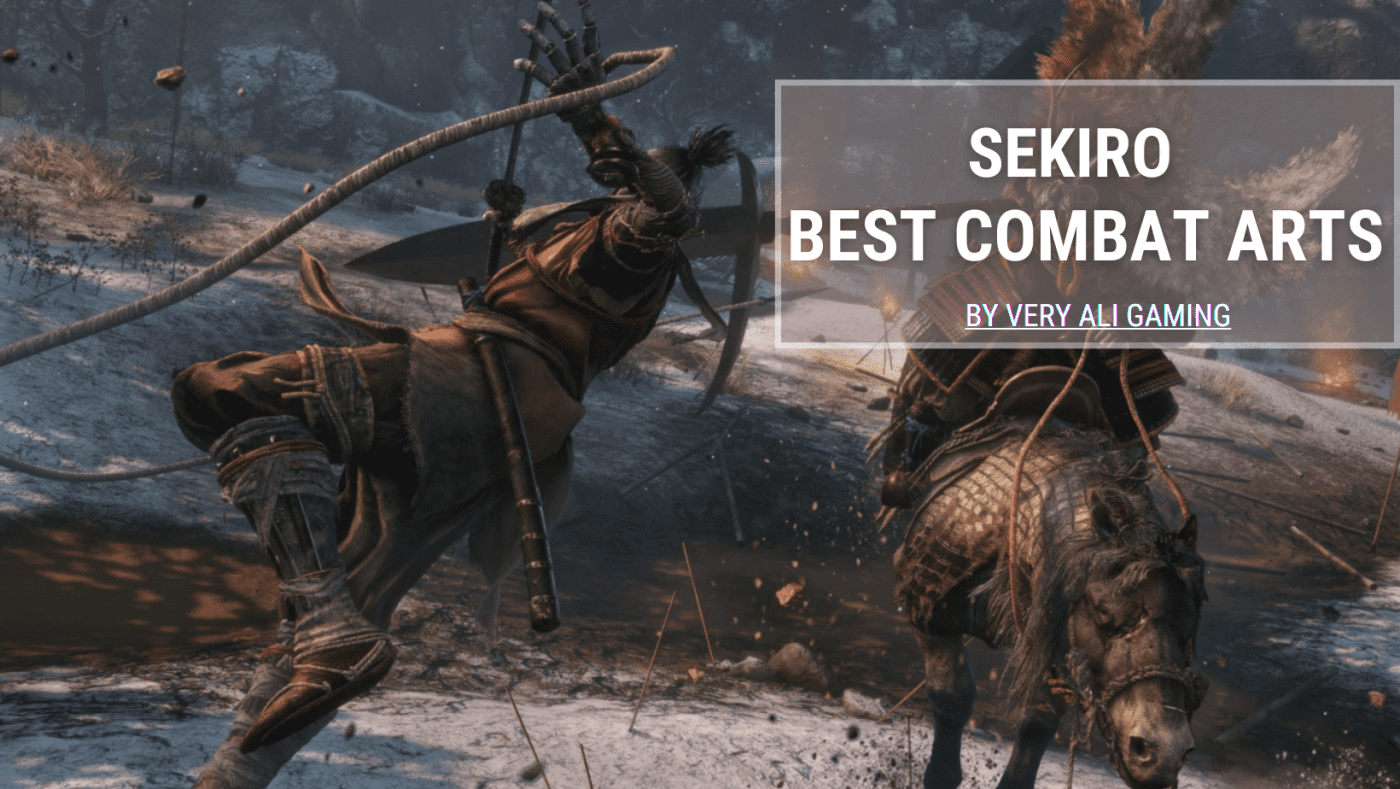 An In-depth guide on the Best Combat Art in Sekiro

Sekiro allows the players to use a wide variety of combat art which can change the tide of battle in their favor. The more you know how or when to use these combat arts depends on how good you are at the game.

From Software went back to the basics in Sekrio. They replaced the RPG elements of Bloodborne and made one of the most fluent and responsive combat systems in recent memory.

Today’s guide will take a look at the Sekiro Best Combat Art and rank them from worst to best – according to my experience, of course.

After replaying the game multiple times, I found out that some of the combat arts are better than the others. Some are more viable in certain scenarios and against various bosses. What makes them even better is the amount of versatility it adds to your repertoire. This article might contain spoilers, so tread shinobi carefully; you have been warned.

This is the final unlock in the Ashina Arts tree. It sheaths Sekiro’s blade before attacking twice with immense speed.
This combat art can do a reasonable amount of damage plus stagger the enemies, but that’s about it. The downside is that it costs two Spirit Emblems and the range is negligible. The worst part is that Sekiro cannot deflect or block enemy attacks once you do this attack. You unlock this around the mid-game part, so at that time, it isn’t as viable as some other combat arts – especially if you consider the Spirt Emblem cost.

Sekiro punches the target relentlessly, and since it cannot be deflected, it deals a good amount of posture damage. The best part is that enemies cannot counterattack while being struck by this.

The only major downside to this is that it can be tough to use for new players. Since you will not be familiar with the enemy’s attack patterns, it can do you more harm than good. That is the reason it’s so low on the list.

This is the first combat art that you’ll be able to earn, hence why it’s the simplest out of the rest. You do two quick slashes at the enemy and deal moderate amounts of damage.

It’s pretty decent when you receive it, but I recommend you change it as soon as you get another alternative.

Shadowrush is the first ultimate skill that players learn in Sekiro: Shadows Die Twice. It launches the opponent in the air after impaling them. The damage is relatively solid and leaves the enemies open to death blows. The upgraded variant of this, however, allows you to follow up and deal more damage.

The cost to use this is two Spirit Emblems. Since there are no follow-up attacks to this, the cost is rather high. The good news is that it does not consume any Spirit Emblems if it doesn’t hit. Overall, it’s a pretty solid and flashy skill that is worth it for early/mid-game.

Much like Shadowrush, this combat art retains the movement and also makes a follow-up attack. The overall damage is good, and the mobility it offers is more than welcomed.

The only downside I can think of is how late you unlock this combat art. At that point of the game, you will find better combat arts than this but it is still worth considering.

This combat art unleashes a flurry of attacks in a small radius, imitating Vergil from Devil May Cry. You are incredibly vulnerable during the animation of this attack. However, the reward is greater than the risk because the damage is absurd. If the enemy blocks the attack, they will still take vitality damage, making this combat art useful.

To be honest, the damage is quite embarrassing, but the mobility it provides undoubtedly makes up for it. Sekiro lunges at an enemy, allowing you to manipulate the distance between you and your enemy really well.

This isn’t an attack for newer players and they might struggle while using it. If you have a good grip on the game, this attack will be much appreciated since it can close the distance towards your opponent rather well.

Remember Praying Strikes? This is that but on steroids. You can upgrade the basic combat art to gain this and the extra attacks are advantageous to break the enemy posture.

It is one of the best posture damaging combat arts, and the best part is that enemies cannot attack you when being hit by this. Then why isn’t this considered as the Sekiro best combat art? I believe that this skill has the most posture damage, but overall it doesn’t provide as much utility as the other attacks.

This attack allows you to leap towards an enemy, attack them, and leap away in an instant. The mobility it provides is unparalleled. There is no other skill that can allow you to control the distance as well as this one. Since you can leap backward, it is useful for newer players because you will have a free dodge after your attacks.

Believe it or not, this is the only ranged combat art in the entirety of the game. This is a superb combat art against weak enemies, especially if they are super aggressive.

It offers great damage and costs two Spirit Emblems. Even if you are out of Emblems, you can still use it to deal solid amounts of damage to aggressive enemies that don’t block as often.

If you love to deal chip damage, then this combat art was made just for you. You obtain this in the late game, but it is an unprecedented attack against the later bosses. You will chip away the target’s vitality at such a fast rate; they won’t know what hit them.

What makes it even better is that enemies cannot block this attack if you combine it with the Divine Confetti or Flame Vent.

The High Monk combines the sword slashes of most combat arts and the kicks of the temple arts. Together, this is fantastic for punishing most of the sweeping attacks.

The major downside to this is that it can take a long time to unlock that those points are better spent on other ultimates. Still, the posture damage is quite reliable and overall, a solid combat art in Sekiro.

The combat arts in the Temple tree are rather lackluster compared to other trees, but this attack is a massive exception.

Sekiro will leap in the air and follow up with multiple aerial kicks that not only counter aerial attacks but also shut down enemies who are doing a wind-up attack. In my experience, this might just be the best counter combat attack in the game. You can even reposition yourself afterward, which makes it more remarkable as you can land at a safe spot.

This is the most effective combat art but trust me when I say that it looks lame. But, don’t ignore it due to its visual flair or lack thereof.

Ichimonji deals absurd amounts of posture damage and reduces the posture buildup of the player. If you time it right, you can turn any fight in your favor. There isn’t much to say about this, but try it out and have fun cutting the enemy posture like butter.

This attack checks everything on the cool combat art checklist. Is it flashy? Yes, is it effective? Does it deal damage? Massive amounts. This combat art lives up to its name and can be used by spending three Spirit Emblems. This attack deals the most vitality by far. This is an excellent contender for the number one spot in Sekiro best combat art.

If you want to trivialize your combat encounters, use this attack to make boss fights easy. If you use the empowered version, you will deal massive damage that can potentially one-shot most enemies. The only flaw is that if you run out of Emblems, it isn’t as effective – or worth using at that point, to be honest.

Remember the Ichimonji and its effectiveness? Now double it and imagine how good this combat art is. After using the first one, you can immediately follow it up by a swift second attack, further increasing posture damage.

You can get this upgrade relatively early if you focus on it. This is the best and strongest option available to players from early-game to late-game. Sekiro’s combat focuses a lot on posture, so if you use this attack, you’ll win every boss fight there is. Oh, and did I mention that this skill does not require any Spirit Emblems to use?

That about does it for the Sekiro Best Combat Art. Go ahead and give them a try and see which one suits your style best. Leave a comment below telling us about your favorite combat art and which one you think is overrated.