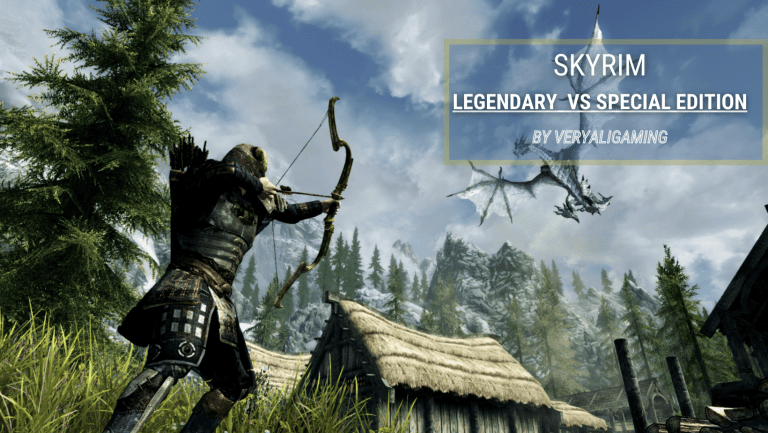 Skyrim is one of the most beloved games of all time. Today we take a look at the various versions the game has to offer and check out all the differences between them.

There are 4 main versions of Skyrim – Standard, Legendary, Special, and VR. The Standard and VR are self-explanatory, but the Legendary and Special are what we are going to talk about today. This article will take a look at all the major differences between Skyrim Legendary Edition vs Special Edition.

Although released way back in 2011, Skyrim is still making sales records and grossing even today. This is partly because Bethesda keeps updating the game to keep things fresh and interesting for the players. But the primary reason why Skyrim is going strong even in 2022 is due to the community mods. If you ask anyone, they will tell you that Skyrim without mods isn’t really “Skyrim.”

If you are reading this article, it means that you are familiar with Skyrim. But for the people that have not played the game or haven’t heard much about it, here is a breakdown of what Skyrim is all about.

The best part is that you can choose from dozens of different classes, which makes every playthrough unique. Not only are there various classes to choose from, but you can also try out tons of other builds to see what suits you best. Speaking of builds, check out the best Division 2 assault rifle builds.

It is an open-world role-playing game that includes action and adventure elements. There are tons of quests to do – the majority of which are open-ended and depend on the player how they complete them. Alongside the main story, countless side quests further immerse the player into the world. You will literally spend hundreds of hours completing side quests – at times, players forget about the main story since the other stuff is that exciting.

There are thousands of mods that can enrich your experience while playing the game. Mods can range from cosmetic items, new storylines, new characters, weapons, locations, powerups, and graphical enhancements. Not only is the base game – alongside its DLCs; extremely fun, but when you add mods, it becomes ten times better.

Now, let’s get to know what each version offers. The Special Edition (SE) is the remastered version of the Legendary Edition (LE). If you purchase the Special Edition, you will get all the content available in the LE such as legendary difficulty, combat modes, skills, and all the DLCs.

Let’s get the main thing out of the way first. Bethesda improved the graphics of Skyrim in the Special Edition so it can keep up with modern titles. Needless to say, if you are a fan of stunning visuals, the SE has got you covered.

Plus, it also supports 4K for both the PS4 Pro and PC. None of this was possible in the Legendary Edition.

The Special Edition allows PC players to play on a 64-bit setup. If you have a modern PC, you are likely to experience fewer crashes, bugs, and screen tearing. This is a major game-changer as before, players had difficulties running Skyrim flawlessly on their modern setups.

As mentioned earlier, mods are a crucial part of Skyrim. PC players have had the luxury to enjoy mods ever since the game came out. There have been tons of crazy mods created by the players to enhance their gameplay and immerse themselves into the world of Skyrim.

Console players were not that lucky when it came to this. But thanks to the Special Edition, console players can now download, install, and even create their own mods. This is a major step in the right direction by Bethesda.

With that being said, let’s take a look at the system requirements for both versions if you want to play on PC.

Which One Is Better

Hopefully, after reading this article, I could clarify what the difference is between Skyrim Legendary Edition vs Special Edition. It is an enjoyable game that you should defiantly check out even in 2022. Happy gaming, Dragonborn!