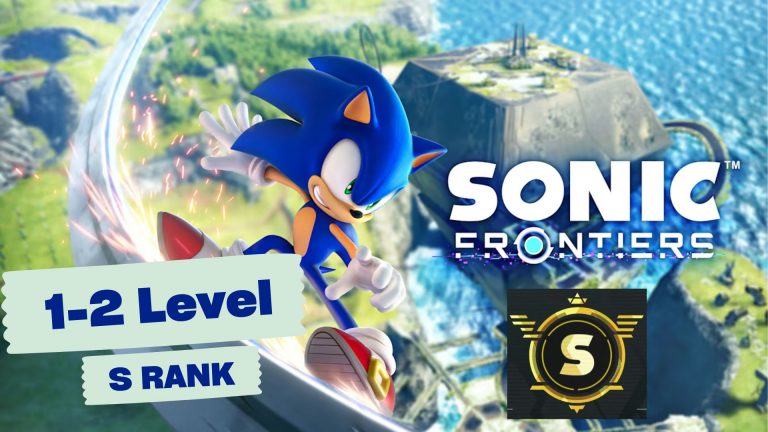 A detailed guide on how to beat Level 1-2 with S Rank in Sonic Frontiers.
Reeshail Qureshi·November 10, 2022·8 min read

Despite being the hardest Level to complete with S Rank in Sonic Frontiers, you can clear Level 1-2 in required time with the help of our guide and a bit of practice.

Not a lot of stages are challenging in Sonic Frontiers, but that is not the case for the 1-2 stage. The time limit to get a 1-2 S Rank in Sonic Frontiers is lesser than most and gives a huge challenge to every player, including veterans of the Sonic games.

So how to unlock 1-2 and clear it with an S Rank? Let’s dig into it further and break down how to complete the demanding 1-2 Stage in Sonic Frontiers.

How To Unlock Portal 1-2

There are 1-7 Portals on almost every island in the Cyber Space stages. Portal 1-2 is a part of Kronos Island that you can unlock after following a few steps. Without the requirement completed, players can not enter the 1-2 Portal and play that stage. Since Sonic Frontiers is an Open World game too, there are some open-world tasks in order to gain access to the 1-2 Portal and complete the stage.

The steps to perform in order to reach and unlock Cyber Space Portal 1-2 are:

While progressing in the early game, you will come across Ninja in Kronos Island, a boss who needs to be defeated. Once you manage to take it down, a Portal Gear in the shape of a ring will be dropped. Collect it, it is one of the two Portal Gears required for 1-2 Portal.

Now make your way to the Portal. The Portal for 1-2 Level is located on the Eastern side of Kronos Island. When you reach the East, head to the South from there and you should be able to detect it in the overworld due to its icon at this point.

Let’s list down the missions/requirements for all 4 vault keys that will assist you in opening vaults for the Chaos Emeralds.

There are a total of five ranks, S, A, B, C, and D in each stage. The time for each rank required differs from other Stages. Let’s discuss the Rank each game completion time gives off in Level 1-2 and what’s the time for 1-2 S Rank in Sonic Frontiers.

Keep in mind, your goal is to complete the round in 55 seconds for S Rank. Anything below it and you will not get the Rank S, which means no key!

Securing a win with S Rank in 1-2 in Sonic Frontiers is the hardest. Even the die-hard Sonic fans are at their wits’ end trying to reach the Portal Gate in 55 seconds’ time. The issue includes 5-6 seconds of the game’s starting intro not under the player’s control. But worry not, a strategic way with a bit of rail and track awareness can let you complete the game within the needed time of 00:55.00 seconds or less. So here are some ways to reduce your match completion time overall.

At the game’s start, you will sprint away on a straight pathway ahead to a slope. There is another optional route by jumping through the three Dash Rings. We suggest taking the Slope instead of the three Dash Rings route. Make sure to use all the Boost Pads that will come along the way. This way you get the best start for the Stage.

Now further on, choose the left narrow path instead of the one on right. Again, make sure to use all the Boost Pads, or at least most of them. The speed provided by Grind Rail on the way along with some Boost Pads will boost you up well.

Now after rail grinding, jump through the three Dash Rings. Now Boost Jump your way to the Red Handles that pull you up to the next platform. Then zoom your way through the other handle surrounded by the Eggrobos. Once you pull yourself up by the second handle, speed boost and start the Homing Attacks chain across the balloons to avoid falling in the steep Bottomless Pit.

Now comes the final grinding rails part. Pass through the rails and avoid any springs while grinding rails. A big loop comes next. You can switch the rail by jumping and skipping the big loop here. It can give you a 2-3 seconds advantage which can make a huge difference. Honestly, switching rails won’t be easy but with some practice, you should be able to do it.

Now with a short platform break, comes another set of rails. This set of rails only contains obstacles that you need to avoid by switching rails at a perfect time and keeping your speed boost button on. Then, a huge loop will come next, once you are past that, the next platform will arrive. Keep your boost speed on and pass through the three Dash Rings that come along your path.

The last step to do is to boost straight ahead, avoiding the last obstacle in middle. Use your Homing Attack skill on the springs ahead and make your way upwards smoothly. There comes the finish line aka the Portal Gate, go in right away y using Speed Boost to end the stage.

There are multiple other ways to complete the stage within the required time too but we seem to get the highest S Rank rate on this one so far. You should be able to reach the Portal Gate in 53-54 seconds at most.

Portal 1-2 is one of the hardest to reach S Rank in, but with a few tries and following the path that we have mentioned, you should be able to reach the goal of 1-2 S Rank in Sonic Frontiers. Hard work always pays off so keep trying and hopefully get the S Rank after reading this guide, Good Luck!

Also, learn how to Fast Travel in Sonic Frontier.