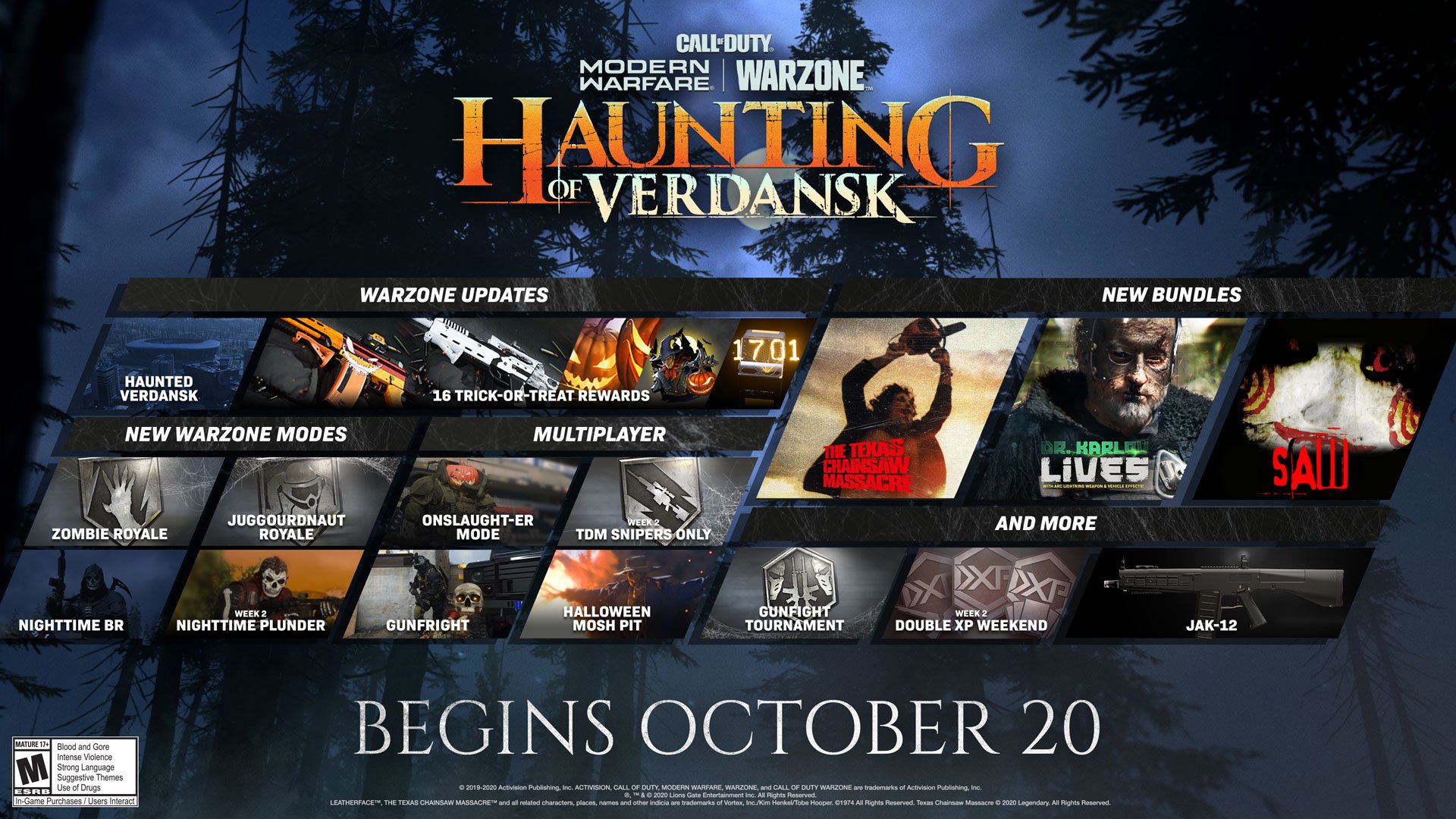 Why the Haunting of Verdansk is the Biggest Event

By the looks of things, this looks to be another normal event. But here are a few things that will make The Haunting of Verdansk the biggest event in Modern Warfare.

The major changes coming in Modern Warfare with the Haunting of Verdansk event will be happening in Warzone.  This new version of Verdansk will still allow you to play normal Battle Royale in Warzone.

But instead of playing in the day like normal, players will now play at night. This means players will have to learn to adapt while roaming this new night version of Verdansk.

But the other changes in the Haunting of Verdansk will be that it is full of easter eggs. These easter eggs are linked spooky things as well as certain Horror films. These Easter eggs can be found at certain parts of the map.

Eagle-eyed players can spot a familiar face on TV sets scattered around Verdansk. Other easter eggs at the train stations as well as other parts of the map like Hospital.

In addition to these easter eggs of horror fils being added, The Haunting of Verdansk will add a new objective system. Players must try and collect while trying to survive opening crates. These crates will give players a way to unlock new Halloween style rewards for their character.

This new objective system can be achieved by opening crates. Players will have to go to certain parts of the map to collect these items. Players can be rewarded with sixteen new items for their characters. The crates will include some new gun variants, calling cards and a watch.

However, not all of these supply drops are treats. Some of these crates can trick you, even giving you a jump scare when opening them so be careful.

There will also be some new game-modes being added. The first is a familiar game-mode that has already been on Warzone before, this is Juggernaut Royale.

The Juggernaut Royale mode will most likely be set in this new night version of Verdansk. This will make it scarier when having to face the Juggernaut.

When someone becomes the Juggernaut in a game now they will now have a flaming Jack ‘O Lantern on their head. It’s a nice addition to this game-mode to give it some sort of replay-ability.

But the new game-mode everyone is talking about (and what I’m most excited for)  is the new Zombie Royale mode.  This new mode will introduce zombies for the first time in Verdansk.

Players must try to outlive hordes of zombies who are being controlled by other online players in your game. The aim to be the last squad left standing with at least one alive person in the game.

If you die or get killed by these zombies you will turn into one. When turning into these zombies, players will become faster and will be able to jump. They won’t become the traditional slow zombie.

It’s not all doom and gloom for players who are zombies. Players who have turned into zombies will have a chance to come back as a human. This can be done if a zombie can manage to take down another human player obtaining their vital. You can also pick a vitals from other dead players.

If they manage to do this, players will have another chance to try and survive. But when you die as a zombie you’re dead until a team mate buys you back.

Not Just For Warzone

Other than just Warzone there are also a few new things being added to Multiplayer mode. This hasn’t been the case in previous events in Modern Warfare as it has only really focused on either Warzone or Multiplayer.

The major new mode that is being added to Modern Warfares multiplayer is the Onslaught-er Mode. In this mode, players will have to obtain a Juggernaut suit (with the new Jack ‘O Lantern skin) and move it to one side of the map.

There will also be a Halloween Mosh Pit mode, that will change a few things in normal multiplayer game modes whilst this mode. For example, when playing Kill Confirmed the dog tags will be changed to skulls.

Another cool feature the developers have included in this mode is when you get a kill streak as your character wears a Jack ‘O Lantern just like the new Juggernaut skin.

When getting more and more kills the more your Jack ‘O Lantern will change with the higher kill streak. So the more kills you get the more you show up as a target to the enemy team.

One of the other things being added to Multiplayer is gun fright but we don’t know what this is yet. There is also a Team death-match sniper only game mode but this will be added in the second week of the event.

Other than new modes being added, there are also three new bundles being added to the game. I am looking forward to these bundles add a new operator for players making games scarier. You will also get new sprays, weapon skins/customisations and vehicle skins.

The first of these bundles is the SAW bundle. This adds the Iconic Jigsaw character in the game. This bundle also adds a unicycle charm for your gun as well as a truck skin.

The second bundle adds another iconic character in the form of Leather-face from Texas chainsaw Massacre as well as Dr Karlov who is seen as a Verdansk urban legend.

And that is all the major things happening in Modern Warfare when the Haunting of Verdansk event arrives October 20.  I hope you understand now why this is the biggest event in Modern Warfare and why should be playing it in the coming weeks.

Thanks for reading Veryali Gaming. While you’re here, check out our other gaming stories like this one about how the Xbox Series X is more likely to outsell the Playstation 5.