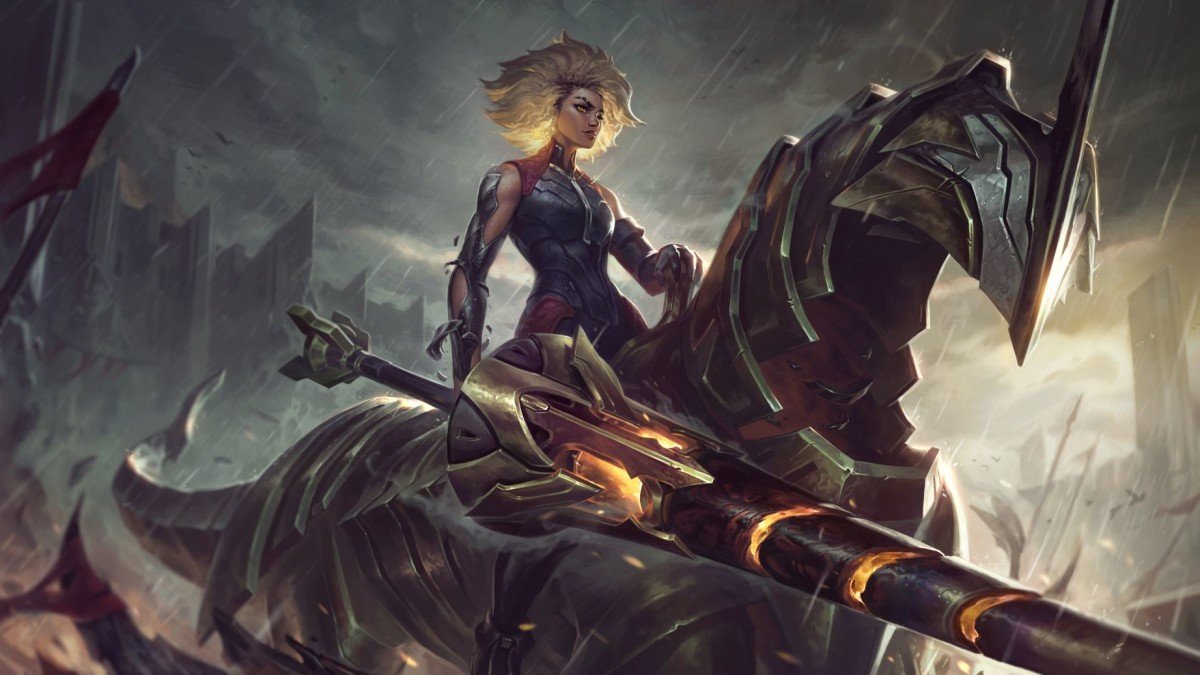 The New League Of Legends Champion Is Here, & She Shall Gallop You Down!

League Of Legends (Get League Of Legends Gift Cards here) welcomes its newest champion, Rell, the Iron Maiden. She is released with a price of 975 RP/ 7800 Blue Essence, a price that will go down after the 17th of December to 6300 Blue Essence. Her bundle that includes her release skin ” Battle Queen Rell ” will cost 1837 RP and will only be available for a limited time.

Rell is an interesting addition to the support line-up, being yet another offensive support that breaks the mold of what a support is thought to be. This time instead of an assassin or an ADC being put in the support role, it is now the bruiser’s turn to get a spotlight down in the bot lane.

Due to her aggressive nature, she will probably be best paired, likewise, with an aggressive ADC such as Lucian, Jhin, or Draven.

Now, let’s get into her abilities, shall we?

This passive – as the name implies – is about breaking the mold. It is what will allow Rell to be tanky while also dealing tons of damage. The passive makes it so she steals armor and magic resistance from each champion she attacks. Attacking a different champion will also refresh the effect on all other champions she has recently attacked. This passive alone would be tricky to balance on most bruisers so we shall see we how it will pan out in the following weeks after her release.

This strike is quite shattering, shield supports watch yourself, as someone is coming to hunt you down. Rell will thrust her lance at the enemy and will destroy all shields and dealing magic damage that scales with 50% of AP and apply Break the Mold for the first unit hit and 25% for subsequent units. If Rell is bound to an ally via her E, they will both heal for 5% of their missing health plus a 30% AP scaling. Thanks to this ability’s fantastic base damage, scaling, and decrease in cooldown as it is leveled up, it makes it a perfect candidate to be the first one to max. (Get League Of Legends Gift Cards here)

This ability is a transforming ability not unlike that of Jayce or Nidalee, but much simpler as it only affects Rell’s w and not her entire kit.

The first part of the ability, Mount Up, provides Rell with a bonus to her movement speed that is further amplified when moving towards enemies, making this spell great for chasing. And if that wasn’t enough, her first attack during the duration will throw the enemy back slightly and deal bonus damage.

The second part, Crash Down, makes Rell leap off her mount, knocking all enemies up for 1 second, which would pair amazingly with someone like Yasuo, and deals substantial magic damage. After using Crash Down, Rell will enter an armored form, gaining a shield, reducing her movement speed, and allowing her to use mount up again.

This ability will most likely be the last one to be level up as its scaling or cooldown don’t get changed from extra points in the ability, only the base damage.

Sharing is caring, so why not share. Activating the spell will bind a piece of her armor to a friendly champion granting them 10% armor and 10% magic resistance while near the Iron Maiden. Using this part of the ability has no cost and will only put her E on a 3-second cooldown.

However, this spell is called Attract and Repel, so here comes the repelling. If Rell doesn’t target an ally with this spell, the binding will be snapped and enemies around her, the bound ally, and in-between the two will be stunned .

The Iron Maiden’s ultimate is nothing to scoff at, she will pull all enemies in an area towards her while dealing massive damage for the next 2 seconds. This ultimate will surely synergize well with other AOE ultimates such as Miss Fortune’s or Samira’s.  (Get League Of Legends Gift Cards here)

So, watch yourselves out there summoners, or you might find yourselves being the next ones trampled under the metal hooves of the Iron Maiden’s horse.

If you’ve liked this article and you’d like to read more about what’s going in the gaming sphere, here are some of our latest articles for you about the “New Deep Rock Galactic Biome Leaked For Update 33 by Devs”, or would you like to know more about the “Little Nightmares 2 Demo and the game’s release date” ?