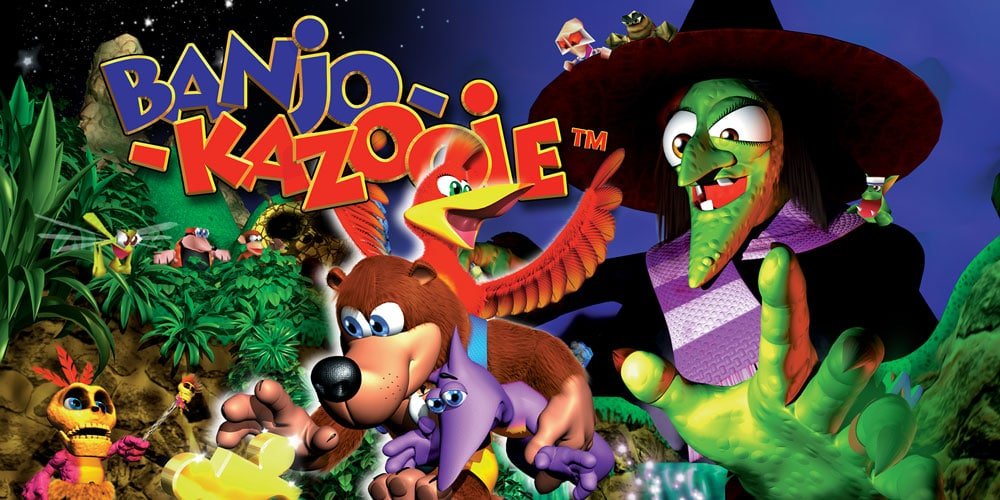 The Timeless Charm of Banjo-Kazooie, the Greatest Platformer of Them All

I’m an indecisive person. If someone asks me my favorite, well, anything, I don’t know how to answer. But when it comes to choosing my favorite platformer of all time, I don’t hesitate: it’s Banjo-Kazooie.

I came to video games in the mid 90s. 2D was on its way out, 3D on its way in, and the mascot platformer reigned supreme. Nintendo had Mario, Sega had Sonic, and more and more other developers were adding their own weird and wonderful characters to the mix.

Among them was Rare (or Rareware, as they were known then). They had already turned Nintendo‘s own Donkey Kong from arcade villain to platforming star in his own right with the SNES’ Donkey Kong Country trilogy. But with the arrival of the Nintendo 64 and the 3D platformer, they really came into their own.

Rare‘s MO for platformers since their SNES days was simple: take the standard set by Nintendo‘s most recent Mario offering, and then blow it up. “Make it bigger,” was the logic, with more collectibles, more secrets, more characters, and more quirky British charm than you can handle. OK, so maybe they were ripping off Nintendo, but so was everybody else, and damn, if Rare wasn’t good at it!

The first thing that hits you when you start this game is that it’s just oozing character from every pore. From the narrative side—story, characters, worlds—to the mechanical aspects like graphics and sound, Banjo-Kazooie is a joyful, flamboyant romp of a video game.

Almost every object in the game is anthropomorphized, from the (somewhat) intelligent Banjo, Kazooie, and the other animals and monsters, to some rather belligerent carrots and cauliflowers, and even to inanimate objects: feathers, eggs, jigsaw pieces, musical notes… and even, famously, a toilet. All of these folks have giant googly eyes and bounce around the landscape with preposterous energy.

Of course, these were the days of the Nintendo 64, so giving all these characters real voices and dialogue was out of the question. The console’s cartridges just didn’t have the space. Instead, Rare opted for a controversial route: giving everybody silly, cartoonish jibber-jabber to speak.

Who in their right mind thought that “Boing!” is the sound a bear makes, we will never know. But aside from this, each critter makes an appropriate noise. There’s Kazooie, the squawking bird, Grunty the cackling witch, Gobi the braying camel, and Blubber the… belching hippo. And that toilet, Loggo? Well, he doesn’t make a flushing sound, I’ll tell you that!

Many people hate this side of the game, claiming that the repetitive yelps and chirps are stupid and grating. I have to disagree. Between the options of boring silence and full voice acting, which really wouldn’t have fit the style of this game, the childish nonsense babble of Banjo-Kazooie is inherently part of its charm.

Full to the Brim

In fact, both these details, and many more besides, are testament to Rare‘s effort and skill in making the most of the N64’s hardware. Early 3D was blocky, blurry, and sparse. That’s one of the reasons why cartoonish visuals reigned supreme, while realistic-looking games had to wait another generation or two to come into their own.

Even the best developers and games struggled to look truly interesting. Super Mario 64, classic that it is, looks not only blocky but flat as well. Everything from its overall world aesthetics to its color schemes was minimalistic and repetitive. Much the same could be said of most contemporaries, like the first Spyro game. It was simply the limitation of the hardware at the time.

This is where Banjo-Kazooie was so different. Here, everything is about variety. Yes, while Super Mario 64 had fifteen worlds, Banjo-Kazooie has only nine. But each one of those levels is utterly unique and memorable. Sure, the first level, Mumbo’s Mountain, is your run-of-the-mill grassy hills level we’ve all seen a million times before. But how many of those other grass levels let you turn into a termite with a backpack?

After that, things just get crazy. There are some traditional levels, like Freezeezy Peak and Gobi’s Valley, the snow and desert worlds respectively. And then there are the likes of Bubblegloop Swamp, Rusty Bucket Bay, and, of course, Clanker’s Cavern, a level set entirely in a sewer and populated by a gigantic mechanical shark with toothache.

Each of these worlds has an entirely different theme, aesthetic, and feel to it, from the bright and sunny Treasure Trove Cove, to the gloomy Mad Monster Mansion (my favorite!), to the lush (at least in spring) Click Clock Wood.

The characters, the colors, the settings… and I haven’t even mentioned the music, which is as varied and delightful as everything else, and always fits perfectly with its surroundings. And I mean that quite literally: one of the game’s most unique features is the way the music changes depending on where you are, such as becoming softer and more muffled when you dive underwater.

Everything, and I do mean everything, in this game stands out. That is its genius.

Now, all this gushing about graphics and sound and design are all well and good, but is the game actually fun? Well, yeah. Duh! In fact, I would say it’s more fun than many AAA titles these days. Why? You guessed it: because of its variety.

Now that video games have become the biggest entertainment industry on the planet, they don’t have to try anymore to get an audience. And it shows, with endless iterations of the same very linear, if admittedly very pretty, gritty shooter flooding the market every year.

In the 90s, video games were only just entering the mainstream, and had not yet exhausted their potential for new ideas. Everything had to be inventive to grab people’s attention, and inventiveness was Rare‘s specialty.

Of course the basic gameplay loop here is very simple. Banjo-Kazooie is a platformer after all. So, by definition, most of what you do involves running around, jumping on platforms (and the occasional enemy), and trying not fall too much.

Beyond that, it all boils down to collecting things. Lots of things. Throughout the game you come across eggs, red feathers, gold feathers, skull tokens, honey combs both full and hollow, bear statues, musical notes, and, of course, jigsaw pieces. Almost all of them are absolutely essential to completing the game.

Yet somehow Rare managed to walk the fine line of packing lots of goodies into their game without it just turning into busy work. The same can’t be said for their absolute behemoth of a collectathon, Donkey Kong 64.

As with everything else, it’s the variety on display that keeps things fresh. You will explore every inch of these nine worlds, not just because you need to collect everything, but because you want to. Because Banjo-Kazooie‘s settings are so diverse, exploring them is inherently fun. How else would you stumble across a talking toilet?

All of this is aided by a control scheme that holds up better than it has any right to do. Banjo and his bird buddy handle like an absolute dream, with a tightness and precision that Mario wouldn’t have until the advent of the Wii and Super Mario Galaxy. Making a difficult jump in Banjo-Kazooie is always a matter of skill, never sloppy design.

Not only the quality but the variety of controls is also noteworthy. Throughout the game you make use of over twenty discrete moves, many of which you have to learn from Bottles the mole. The fact that they are spaced out also enhances the game’s pacing, as you gradually have to perform more and more complex maneuvers to find the last of the Jiggies.

And finally there’s the story. Again, people have criticized it for being simplistic and ludicrous. Yes, indeed it is, but only because that’s exactly what it wants to be.

The premise here is that the evil witch Gruntilda wants to be the prettiest gal in the land. But when she asks her magic mirror for affirmation, he reluctantly points out that fairest is, in fact, Tootie, Banjo’s little bear sister. An enraged Grunty sweeps out of her tower to kidnap the girl and steal her beauty with an infernal machine. Meanwhile, Banjo, the dope, sleeps through the whole ordeal. And so he and his best friend Kazooie must set off on an adventure to save cute little Tootie from an ugly end.

Now, call that simple if you like, but it still took me five times as long as summarizing a Mario game: Bowser kidnaps Princess Peach (who knows why), so Mario has to rescue her.

At its core, Banjo-Kazooie‘s ridiculous story is a parody of the very same Mario tropes it is ostensibly aping. For God’s sake, the villain doesn’t want to kill anyone, she just wants to steal their good looks. OK, sure! On top of this, the story of bear and bird constantly breaks the fourth wall to poke fun at itself. Just look at the arguments between Kazooie and Bottles.

All of these different aspects, from the look and sound of the game, to its level design and gameplay loops, to its zany plot and characters, combine to make a package that truly comes close to perfection.

Don’t believe me? Then just watch this compilation video of people reacting to the news that Banjo and Kazooie were coming to Super Smash Bros. Ultimate. Go ahead, I’ll wait.

In the almost twenty three years since Banjo-Kazooie first came out, the game has undeniably reached cult status. Not only older gamers who played the original, but younger generations too have fallen in love with the flea-bitten pair.

Banjo-Tooie was a worthy sequel, improving on the original in every way while somehow innovating it as well. The fact that the cancelation of the stop’n’swop feature from this duet utterly crushed me as a kid is testament to how much these titles meant to me.

Admittedly, Banjo-Kazooie: Nuts and Bolts did not help to cement the franchise’s popularity, but it was also doomed from its inception. It came out at the low point of the platforming genre, after its peak and before its resurrection. It also came out on the Xbox 360, whose main demographic was decidedly not the platformer fan.

Then again, both Banjo-Kazooie and Banjo-Tooie were re-released on Xbox systems—twice. That shows that even as older games, they had a dedicated fan base of veterans and newcomers who wanted to play them.

So back we come to that Smash Bros. reveal. People truly lost their minds with joy at being able to play as the bear and the bird again. Like so many of them, I pray that this is a sign of more to come.

This article was written as part of a competition with my fellow VeryAli writers to determine whose favorite will win. Thank you for reading, and I hope you enjoyed it. And if you agree that Banjo-Kazooie is the greatest platformer of all time, please drop a comment below! You can get all 3 Banjo-Kazooie games through the following links:

While you’re here, why not check out some of our other recent news articles, such as Google Stadia to Release Over 100 New Games This Year, or Eldrador Creatures (Switch) Review: The Worst Strategy Game Ever? You can also head over to our YouTube Channel for even more content. Thanks for reading VeryAli!