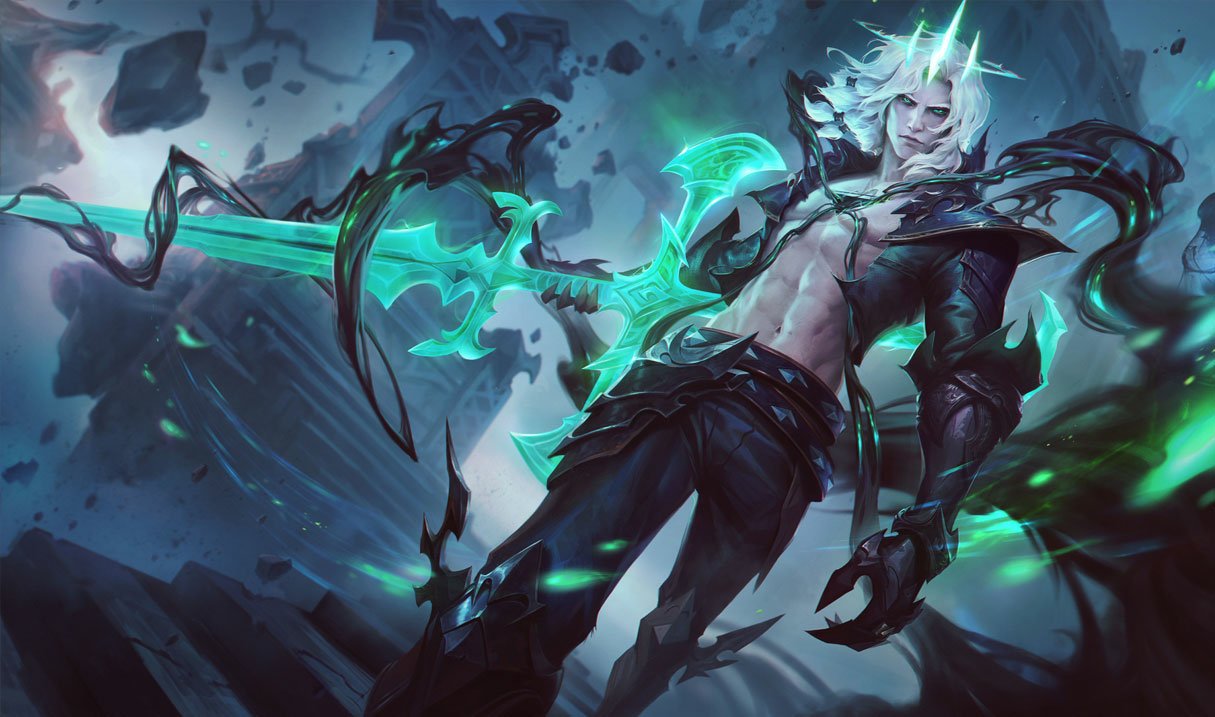 Riot has finally added the long-known character of The Ruined King to League of Legends as a playable champion. His full name is Viego, the Ruined King, and he has a sad story to tell. Remember the whole “Black Mist” thing that ravages Bilgewater in the annual Harrowing event? Yeah, that’s Viego’s fault. Our liege attempted to use forbidden magic to resurrect his wife, and that went about as well as any attempt to grapple with unknown powers would. Read his full story on the League of Legends Universe site. Let’s dive in and see what this Black Mist ridden royalty has in store for us.

The Ruined King’s passive shows he really does exert dominion over the other champions on the Rift. Enemies who die by Viego’s hand become wraith’s, similar to Senna’s passive. Unlike Senna, though, Viego does not redeem these spirits but takes control of them. Attacking a wraith heals Viego for a portion of their health, and allows him to use the fallen champion’s non-ultimate abilities. He replaces their ultimate with his own, which brings him back to his own form.

For champions with different forms (Nidalee, Jayce, Elise, etc.), Viego will gain access to the abilities they had at the time of their death.

Q – Blade of the Ruined King

Hey, it’s like that one item! Passively, it gives the effects of the item as well as another bonus. If Viego attacks an enemy he has recently hit with an ability, he hits them twice. The active has him thrust forward with his big spooky sword.

Leveling this ability increases the passive portions as well, so this is a good candidate for maxing.

Using this ability initially slows Viego while he charges up a glob of Black Mist to hurl forward. The second cast throws forward the Mist, stunning the first enemy hit.

Viego shows off his real control over the Black Mist with this ability. He casts forth the Mist, camouflaging within it. If it hits terrain, the Mist clings to it and spreads. While in the Mist, Viego gains movement and attack speed.

I like this ability for multiple reasons. This Black Mist camouflage is a pretty neat ability in and of itself. It’s the same type of stealth as Senna, which is a cool way to link the lore to mechanics, as both commands the Black Mist.

Ensuring the enemy feels the same pain as he does, Viego, the Ruined King teleports to a location. Upon appearing, he stabs at the heart of the nearest champion, knocking away others.

Heartbreaker is a solid way to guarantee Viego backline access. The knockback is the icing on the cake, as it gives him a valuable instant to get in some autos for his Q passive and get his passive rolling.

You can find videos and more information on Viego at his champion page here.

Viego’s intention is to dive on an enemy team’s squishy champions, take them out, and use the fallen’s strengths against their teammates. A true assassin build could benefit him, but I believe he performs best when built like a bruiser. Conqueror, Ravenous Hunter, and a mildly beefy build benefits his innate sustain greatly.

Obviously, the Ruined King synergizes with his own item, doubling up with his Q passive. The go-to mythic is easily Goredrinker, that kind of sustain in a fight is vital for Viego to sap souls. Trinity Force would also be a good choice.

For more background, look at the Riot dev blog on him. His champion spotlight also shows Viego, the Ruined King in action!

Excited to play Viego? Want to talk build paths and strats? Let us know! If you enjoyed this article, check out some of our others like Cyberpunk 2077’s Concept Art: Johnny Silverhand Before Keanu Reeves and A New Star Wars KOTOR Game Is Reportedly in Development!